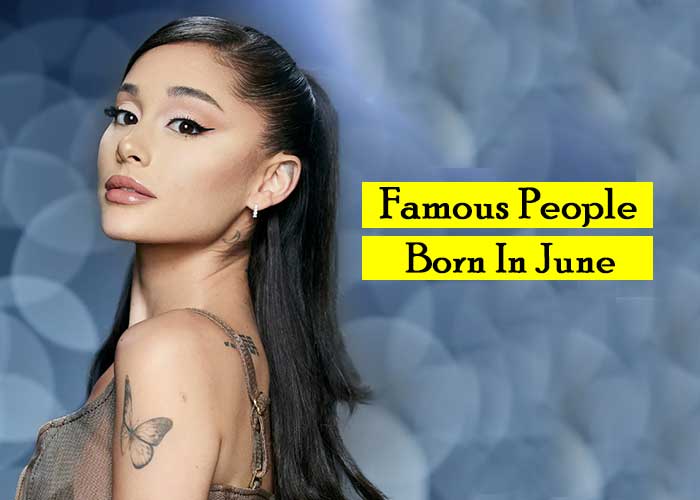 Famous People Born In June or Celebrities Born in June Are

Angelina Jolie is an American actress, filmmaker, and humanitarian. . She has received various honours, such as an Academy Award and three Golden Globe Awards, and has frequently been referred to as Hollywood’s highest-paid actress. Jolie’s notable movies are Maleficent, Mr. & Mrs Smith, and The Tourist.

Also Read: Zodiac Signs Who Are Hard To Impress

Entrepreneur and investor Elon Reeve Musk FRS is an American citizen. He founded The Boring Company, is the CEO and Chief Engineer of SpaceX, is an angel investor, the CEO, and the chief product architect of Tesla and is a co-founder of Neuralink and OpenAI.

Also Read: Zodiac Signs Who Argue In A Relationship

Sundar Pichai is an American business executive of Indian descent. . He is the chief executive officer (CEO) of Alphabet Inc. and its subsidiary Google.

Gautam Shantilal is an Indian billionaire tycoon. He is the chairman and founder of Adani Group, an Indian-based multinational conglomerate. He is the richest person in India and in Asia. According to the Bloomberg Billionaires Index, he is the second-richest person in the world, behind Elon Musk, while Forbes’s real-time billionaire index places him as the third-richest.

Ekta Kapoor is an Indian filmmaker, producer, and television producer who specializes in Hindi soap operas. She serves as Balaji Telefilms Limited’s co-managing director and creative director. Ekta’s notable movies are Once Upon a Time in Mumbaai, The Dirty Picture, and Dream Girl.

Lionel Andrés Messi is an Argentine professional footballer who plays for Ligue 1 team Paris Saint-Germain and captains the Argentina national team. Messi, who is recognized as one of the best players of all time, has won a record six European Golden Shoes and a record seven Ballon d’Or awards.

Also Read: Zodiac Signs That Struggle With A Break Up In A Relationship

John Depp is an American actor, producer, and musician. In addition to being nominated for three Academy Awards and two BAFTA awards, he has won other honours, including a Golden Globe Award and a Screen Actors Guild Award. Johnny Depp’s notable movies are Pirates of the Caribbean: The Curse of the Black Pearl, Sweeney Todd: The Demon Barber of Fleet Street, and A Nightmare on Elm Street.

Also Read: According To Astrology People Having Their Name Started With 5 Letters Have Rude Nature

Tupac was an American rapper. One of the most well-known rappers of all time, Tupac Shakur has sold more than 75 million records worldwide, making him one of the most successful musicians. Tupac Shakur’s notable songs are Can’t C Me, God Bless the Dead, and Letter to the President.

American former professional boxer Michael Gerard Tyson competed from 1985 to 2005. One of the best heavyweight boxers of all time is thought to be Tyson. From 1987 through 1990, he held the undisputed heavyweight title. The only heavyweight to successfully unify the WBA, WBC, and IBF belts in succession, he was the first heavyweight boxer to do so.

Also Read: Find Out How Your Ego Finally Effects You According To Your Zodiac Sign

Kanye West is an American rapper, record producer, and fashion designer. He is widely recognized as one of his generation’s greatest musicians as well as one of the greatest and most influential hip hop artists of all time. Kanye West’s notable songs are Spaceship, All Falls Down, and Devil in a New Dress.