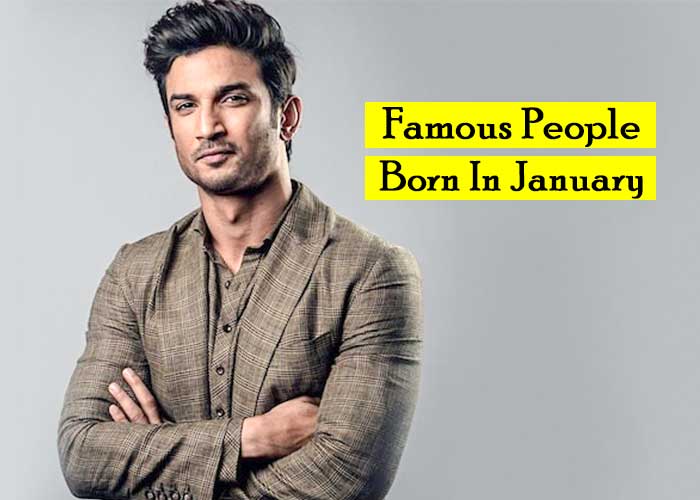 Famous People Born In January or Celebrities Born in January Are

Bradley Charles Cooper is an American actor and filmmaker. He is the recipient of various accolades, including a British Academy Film Award and two Grammy Awards. Bradley Cooper was listed as one of the100 most influential people in the world in Time magazine in 2015. He also appeared on the “Forbes Celebrity 100” three times. His notable movies are American Sniper, Burnt, A Star Is Born.

Hrithik Roshan is an Indian actor who works in Bollywood films. He has portrayed a variety of characters and is known for his dancing skills. One of the highest-paid actors in India, he has won many awards, including six Filmfare, four for Best Actor, and one each for Best Debut and Best Actor. Hrithik’s nickname is Duggu. He is also called a Greek God by his fans due to his looks and physic. Duggu’s notable movies are Super 30, WAR, and the Krish movie series.

Oprah Winfrey is an American talk show host, television producer, actress, author, and philanthropist. She is best known for her talk show. She also produced and co-starred in the drama miniseries “The Women of Brewster Place”. Oprah Winfrey is also a writer she has co-authored five books. In spite of being born into a poor family, she became a millionaire at the age of 32 when her talk show became a huge success. Her Famous Talk Show: The Oprah Winfrey Show.

Ellen Lee DeGeneres is an American comedian, television host, actress, writer, and producer. She starred in the sitcom Ellen from 1994 to 1998 and hosted her syndicated television talk show. Her Famous Talk Show: The Ellen DeGeneres Show.

Elijah Jordan Wood is an American actor and producer. He is best known for his portrayal of Frodo Baggins in the Lord of the Rings film trilogy and The Hobbit: An Unexpected Journey. His notable movies are The Lord Of The Rings, Hobbit, and Maniac.

Also Read: 10 Amazing Facts Of People Born In May

Jeffrey Preston Bezos is an American entrepreneur, media proprietor, investor, computer engineer, and commercial astronaut. He is the founder, executive chairman, and former president and CEO of Amazon. He is among the top billionaire in the world.

David Michael Bautista Jr. is an American actor and former professional wrestler. He participated in WWE events from 2002 to 2010, in 2014, and one final run from 2018 to 2019. In his acting career, he is most widely known for his portrayal of Drax the Destroyer in the Marvel Cinematic Universe. His famous movies are Avengers: Infinity War, Thor: Love and Thunder.

The most talented celebrity born In January was Sushant Singh Rajput. He was a Bollywood actor known for his brilliant work in Bollywood cinema. Due to his contribution to the film industry, he received a Screen Award and nominated for the Filmfare Awards. He appeared on Forbes India’s Celebrity 100 list twice. His notable move names are M.S. Dhoni: The Untold Story, Kedarnath, Chhichhore.