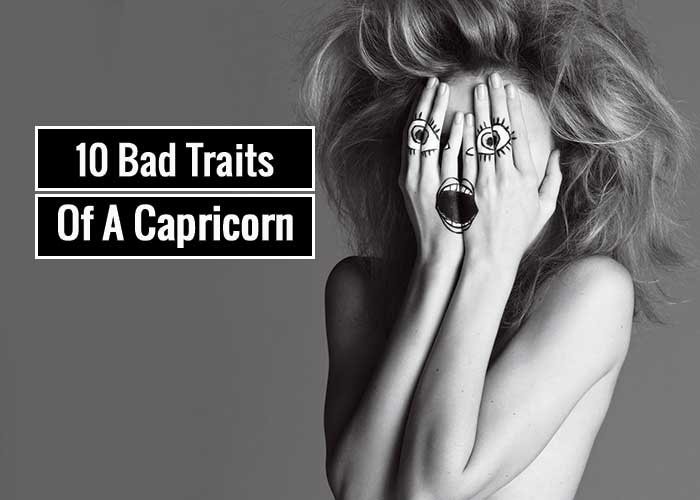 A person of self-discipline, who is ambitious, and practical. Capricorns are known for their love for their ambition, they can work like anything and go to an extent to achieve their ambition. This wise and patience zodiac sign also has a number of negative traits that you need to know. Here is the list of 10 bad traits of a Capricorn.

Also Read : Zodiac signs Who Are Least Supportive In A Relationship

Capricorn always sees the negative aspect of the coin before talking about the positive sides, and sometimes they land up with so many irrelevant questions that one find irritated to work with a Capricorn.people usually term it as one of the bad traits of a Capricorn. They are so scared to come across odds that they hardly things of taking the challenge and are so pessimistic about things.

They are people who hardly get close to a person to an extent as a Capricorn can get detached from a person without even having a second thought. They hardly get attached to people and they can just walk out from your life without having any regrets about it.

They can be very demanding at times. For a Capricorn, if they say they need something now means right now but when it comes for them to do something they start to procrastinate it and it is known as one of the bad traits of a Capricorn.

They are very suspicious about everything and you may feel awkward to be with a Capricorn because of their suspicious nature. They are suspicious not only about events but even about people and this is one of the bad traits of a Capricorn.

Capricorn has a strong feeling that their decision is the best one and they will hardly move out of it and thus they are known as stubborn. And this nature of a Capricorn proves difficult for others to work with a Capricorn.

Also Read : How To Deal With A Selfish Girlfriend?

You will find a Capricorn with a dull look frequently. They are people who spread charm but sometimes their pessimistic nature compels to walk around with a gloomy look.

Also Read : 5 Things You Need To Hear After A Breakup