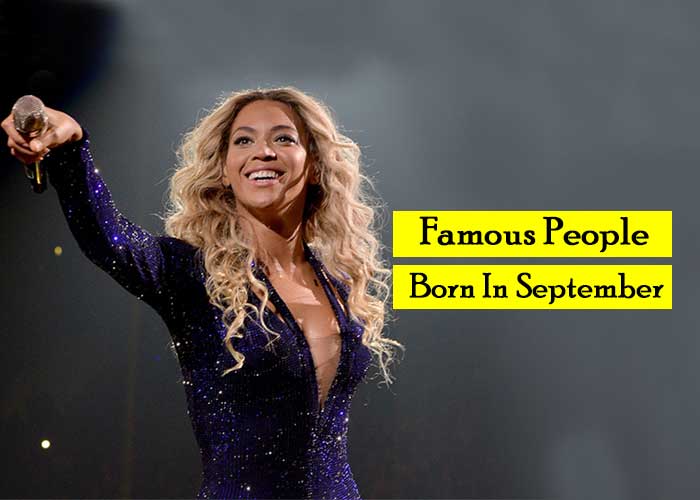 Will Smith is an American actor and rapper. Smith has received multiple accolades, including an Academy Award and four Grammy Awards. He is one of Hollywood’s most bankable stars. Smith’s notable movies are Men in Black, Aladdin, and Focus.

Also Read: Celebrities Born in May

Famous people born in September – Keanu Reeves is a Canadian actor. He gained praise for playing a hustler in the independent drama My Own Private Idaho and established himself as an action hero with leading roles in Point Break and Speed.

Beyoncé is an American singer, songwriter, and actress. Her success has led to her becoming a cultural icon and earning her the nickname “Queen Bey“. She is one of the world’s best-selling recording artists. Beyoncé’s notable songs are Irreplaceable, Sorry, and Beautiful Liar.

Famous people born in September – American tennis player Serena Jameka Williams is no longer competing professionally. She held the top singles ranking in the world for 319 weeks, including a joint-record 186 straight weeks, and five times she was crowned year-end No. 1 by the Women’s Tennis Association.

Also Read: Zodiac Signs Who Are Honest In Their Relationship

Adam Richard Sandler (born September 9, 1966) is an American actor, comedian, film producer, and writer. Sandler’s films earn more than $4 billion at the box office. He had an estimated net worth of $420 million in 2021 and signed a further three-movie deal with Netflix worth over $350 million. Sandler’s notable movies are 50 First Dates, Blended, and Hustle.

Also Read: Zodiac Signs Who Are Frugal For Themselves, But Spend Money Madly On Others

Avril Lavigne is a Canadian singer and songwriter. She is considered a key musician in the development of pop punk music since she paved the way for female-driven, punk-influenced pop music in the early 2000s. Avril Lavigne’s notable songs are Complicated, Sk8er Boi, and I’m with You.

Nicholas Jerry Jonas is an American singer, songwriter, and actor. He formed a band with his older brothers as Jonas Brothers. The band released its debut studio album, It’s About Time, through the Columbia label in 2006. After leaving Columbia Records and signing with Hollywood Records, the group released their self-titled second studio album in 2007, which became their breakthrough record. Nick Jonas also acted in the movies and his notable movies are Camp Rock, Camp Rock 2: The Final Jam, and Jonas Brothers: Living the Dream.

Alecia Beth Moore known professionally as Pink is an American singer, songwriter, actress, and dancer. In 1995, LaFace Records saw potential in Pink and offered her a solo recording contract. Her R&B-influenced debut studio album Can’t Take Me Home was certified double-platinum in the United States and spawned two Billboard Hot 100 top-ten songs: “There You Go” and “Most Girls“.

Also Read: Most Influential Zodiac Signs Who Can Impress People In No Time

Talented people born in September – Asha Bhosle is an Indian playback singer, entrepreneur, occasional actress, and television personality who predominantly works in Indian Cinema. Known for her versatility, she has been described in the media as one of the most influential and successful singers in Hindi Cinema. In her career spanning over eight decades, she has received several accolades. Bhosle’s notable songs are Aaiye Meharbaan, Sajna Hai Mujhe Sajna Ke Liye, and Piya Tu Ab To Aaja.

Ayushmann Khurrana is an Indian actor and singer who works in Hindi films. Known for his portrayals of ordinary men often battling social norms, he is the recipient of several awards, including a National Film Award and four Filmfare Awards. He has appeared on Forbes India’s Celebrity 100 list of 2013 and 2019, and Time named him one of the 100 most influential people in the world in 2020. Ayushmann’s notable movies are Article 15, Dum Laga Ke Haisha, and Andhadhun.

Stephen Edwin King is an American author of horror, supernatural fiction, suspense, crime, science-fiction, and fantasy novels. Described as the “King of Horror“, a play on his surname and a reference to his high standing in pop culture, his books have sold more than 350 million copies, and many have been adapted into films, television series, miniseries, and comic books. King’s notable novels are The Dark Tower, Secret Window, and Doctor Sleep.

Akshay Kumar is an Indian-born naturalized Canadian actor and film producer who works in Hindi cinema. In over 30 years of acting, Kumar has appeared in some 100 films and has won several awards, including a National Film Award for Best Actor and two Filmfare Awards. Kumar’s notable movies are Gold, Kesari, Airlift, and Baby.