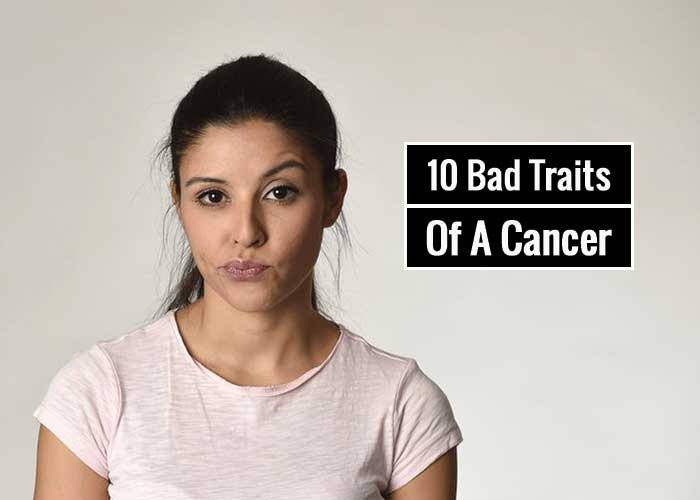 People born under this zodiac sign tend to be very sensitive, empathetic in nature and at the same time very complicated. They feel things deeply and tend to be very emotional at times. They are very loving and creative, along with these traits Cancer has a number of negative traits. Here are the 10 bad traits of a Cancer zodiac sign.

You will see that a Cancer gives up before even trying. They tend to see the bad sides of the coin and are deeply afraid of failures and this is one of the reasons they talk about results first before trying out something. This is one of the worst traits of a Cancer.

They are filled with emotions and you can even term them as over emotional, they are not rational at all. You will find them taking an emotional decision over rational.

They are people who get attached very easily and scared of detachment, in fact very scared. They want to hold everyone around them and want to be stuck with them. You can term them as clingy who wants to be with their loved ones all the time.

Also Read : How To Love A Cancer?

You will see them nagging all the time. They will behave like a small kid and will nag for everything they want. It is one of the bad traits in Cancer and makes very difficult for others to handle them.

Being in a relationship with a Cancer will make you remind about this trait of theirs. They are very suspicious when it comes to relationship and not only on this but even in minor things they will doubt your intentions once and then will proceed.

Also Read : 3 Zodiac Signs Who Can Be Every Woman’s Nightmare

They don’t express what is inside them and it not only affects their relations but also themselves, it gives them a lot of stress when they are filled with words and emotions but tends to suppress it.

Cancer is so sensitive that sometimes they feel that showing their real self or their feelings to others may hurt them or may affect their image, thinking this they tend to be fake with others as well as with their own self.

They are scared of rejection and this is the reason taking the first step becomes difficult for them. They take their steps carefully and are really scared to face rejection in life.

10. Likely to abandon everything if failure comes in their way:

They will run away from a conversation, people, if failure comes their way. Not only failure but if a Cancer is upset for a reason than they can run away from people and may not even speak to anyone making it one of the very bad traits of a Cancer.