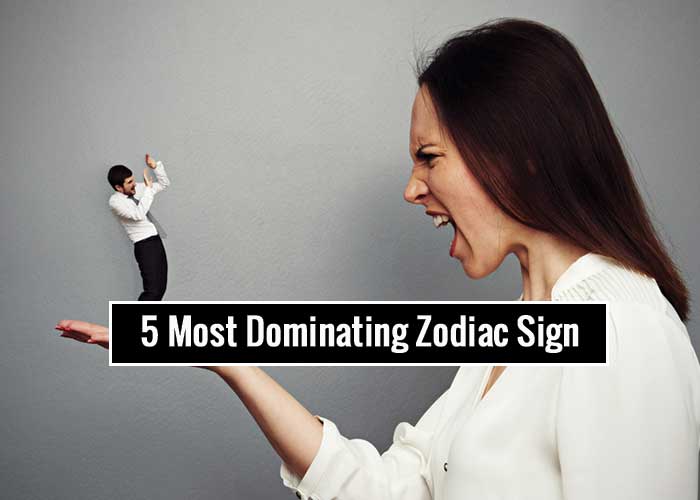 Searching for the most dominating zodiac sign? The one who loves dominating and really does dominate others. All the zodiac signs are strong enough but the will to dominate by the mature is possessed by the below-listed Zodiac signs.

They are people who hold a strong personality and loves dominating. They have an intense personality and they can be so conscious about their self-security that they can become very dominating. They are very adventurous and are filled with energy. Aries doesn’t fear anything, they are ready to start new challenges and do has leadership qualities. They are known as the most dominant Zodiac sign.

A Scorpio is a person who seems to be a mysterious Zodiac sign, they will make you stick to them just with their mysterious attitude. They are so powerful and strong that they can destroy a person from both outside and inside. They are smart and clever, so much so that they know what to do and when to do. They are one of the most dominant zodiac signs who can dominate a person both emotionally and by their intelligence. They enjoy dominating and it is one of its traits.

A Taurean is a materialistic person. They are cool as ice until you get into their nerves, once they get angry then no one can save you from their madness. They are productive people, who is stable and sensual. They have good taste, a sense of beauty. Since a Taurus is a bull they are null headed and is very scary. They will not be afraid to fight with anyone and will end up winning it. They are very dominant in nature. And this nature of a Taurus has brought Taureans in the list of the most dominating zodiac signs.

They are people with a complex personality, they are known for their sudden mood change. They are people who nag and are very demanding in their nature, especially from their close ones. Cancerians can dominate others by their emotional attitude, a sign who demands care and nurturing all the time.

Also Read : The Impact Of Childhood Trauma On Adults

Leo, the king and queen of the jungle whose trait is to dominate others. They are very strong signs who holds an attractive personality. They are not at all fearful about anything, they take up any challenges and holds that quality to accomplish the task. They are intelligent people who know how to design strategies and plans and how to reach their goals. They are the most dominant zodiac sign and they love dominating others as they are known as people who want all the attention. And that’s the reason they are in the list of 5 most dominating zodiac signs.

Also Read : Zodiac Signs Who Will Remove Toxic People Out Of Their Life