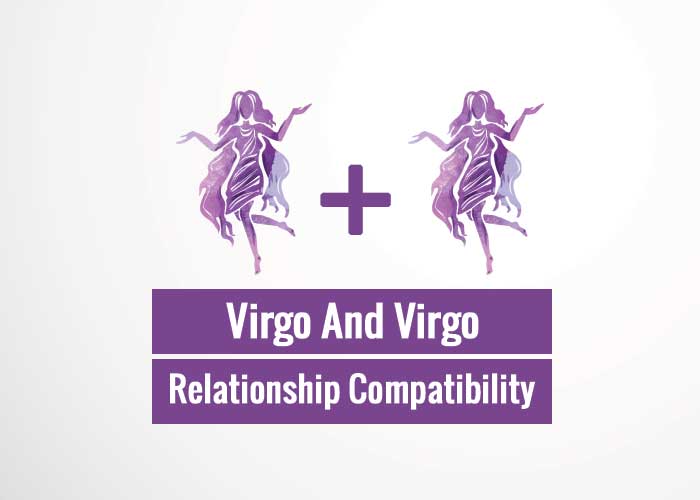 Virgo is the practical and responsible sign, so when two Virgos meet, they only meet each other when they are ready enough to give their hearts. Since for them, security matters and they both will work hard on their field and help each other to grow. However, they might struggle to express their emotions but the need to achieve and practical nature will pull them together. Sometimes they may fail to understand their own emotions as they have so many goals, that is why getting another Virgo who can understand a Virgo can build connections. To know more about their compatibility let’s go through Virgo and Virgo relationship compatibility.

Virgo Virgo’s relationship compatibility says that they might not often look into the physical appearance of their partner but indeed they will look at their personality. So when Virgo finds which is equally competitive and can pace up with them, they find it sexy about their partner. Virgo might not express themselves very often but they show some gestures that indicate that they are soft inside. So when two Virgos are together definitely they will be attracted to thoughtful minds and organized nature.

What to say? When two analyzer talk. They are philosophers, stubborn and who are highly attentive towards details. This personality about them can make their conversation look like two people or perhaps a couple trying to solve a mystery with their insightful ideas. Sometimes they might argue because of opposite opinions but they will be able to handle it if they both don’t try to interfere with their own self-ego. Their communication will be healthy and it will be one of the reasons that may keep Virgo and Virgo’s relationship going.

They might not get full scores on understanding but they are not less. Because of their thoughtful nature, and the tendency to overthink can make situations complicated but they will always have that optimism that makes both of these Virgos understand each other in their ups and downs. They are someone whom people can rely on. Their displaced nature will help a lot in making their hard times easy and making decisions. They will be well prepared to face challenges of life.

When it comes to trust they will doubt each other pretty often, but not to blame it’s their overanalyzing personality that makes it tough, but as they can rely on each other and their optimism will solve their issues. They have that criticizing and doubting nature which will automatically create trust issue and gaining trust can be hard for them but eventually, they will build a strong, stable and solid relationship

They are not best at expressing their emotions indeed we know it. But they tend to hide their emotions and it can be seen on their eyes, trying to show that they are strong but they know it that they want to cry actually. So it will be cute to look these two Virgos together trying not to cry and giving each other lectures about being strong but can we stop tears? They will try to distract each other and crack jokes to avoid awkwardness but they will end up crying and laughing together. So it’s really beautiful about Virgo, they won’t talk about emotions and we hardly have seen them being vulnerable but they express it in different ways, perhaps not with words.

Also Read : 4 Zodiac Signs Who Are Highly Attracted By The Females

Virgo and Virgo love compatibility says that it would be funny to say that two Virgos don’t understand each other when it comes to sex. One of the main problems with the sign of Virgo is their search for faults, and this can be a real deal-breaker when it comes to sex. When two Virgo partners enter into a sexual relationship, the need for criticism multiplies, and it gets worse as they seem to motivate each other to grow it. And both the partners don’t realize that this takes away their emotional or sexual satisfaction and makes them feel tense. Since they can communicate well it is a good thing as it even helps them to make their sex life much better through the art of speech, but unless they are madly in love, to begin with, they may think of their sexual relations as inadequate. They realize that they don’t feel relaxed with one another, often not even knowing why. But one good thing in a sexual relationship of two Virgos is their respect for each other’s sense of shame and the pace they want their relationship to move in. Virgo is a mutable sign and when two Virgo comes together it will help them make the necessary changes to make things work.

Overall, Virgo and Virgo’s relationship compatibility says that they will be in one of the most criticizing relationships as when two critics sit together they are there to criticize each other. No doubt, there will be healthy communication, there will be trust and they will love each other’s thoughts but despite all this, they will hardly be able to make each other happy. Their similar traits will bring them together but at the same time, their behavior will drift them apart. It will be only with time and they already have patience so as they give time to each other everything will be okay.

Also Read : The Ideal Best Friend For Each Zodiac Sign