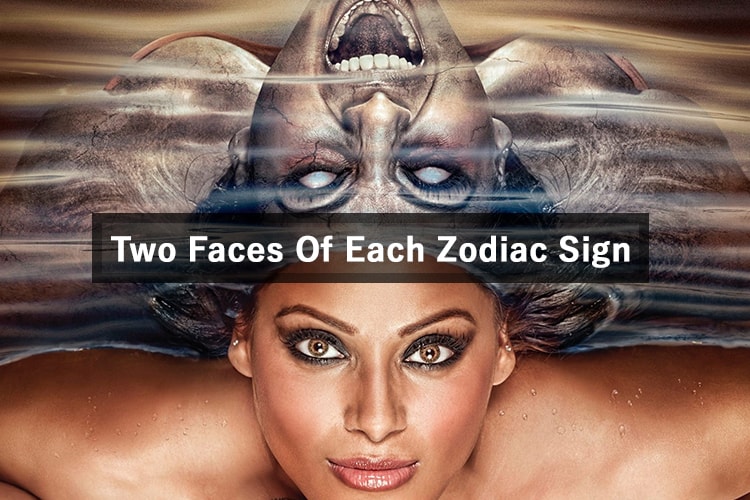 There are two different humans residing inside every human. It can be both, the positive and the negative. This article will deal with each zodiac signs one-by-one and we will talk about the two faces of each of them.

This sign has an ample of Zest and enthusiasm for life. They are motivated, ambitious and passionate. They will obviously shine bright wherever they pass by. They are a determined, confident and fearless individual who will always stand up for themselves and will never step back from any challenge.
On another aspect, Aries can get simply annoying, domineering, moody and argumentative. If things don’t get their way than they can get angry and have a problem listening to others without butting in sometimes.

This is the sign who works extremely hard and they always curve for stability in their life. They want everything to be stable from their jobs to their partner. Taurus is a devoted lover and will always remain loyal in a long-term relationship. Taurus only value excellent things in life and will work as hard as they can to provide these things for themselves and their significant other.
On another aspect, Taurus can be uncompromising, firm and stubborn. They can also become extremely possessive with their lovers.

Geminis are known for being friendly, open-minded, outgoing, social butterflies that never seem to have a frown on their face. They don’t ever allow themselves to get bogged down in life. They float through life seeking adventure and trying not to let anything bring them down.
On another aspect, Geminis can be impatient, which causes them to make irrational and impulsive decisions. When they are under a lot of stress, they can vent on somebody close to them, hurting them in the process.

Cancers are emphatic, loyal and deeply devoted people. They are also great listeners and will let you cry on their shoulder even if they barely know you. They are very sensitive, kind, and genuine people, therefore, they are often ill-treated by others.
On another aspect, being perceptive and sensitive, they fall prey to anxiety disorders and depression easily. Due to this they often feel like no one understands them, which leads them to isolation and self-pity.

Leos are natural-born leaders and have the ability to steal the limelight. They are hilarious, ambitious, energetic and confident people.
On another aspect, they can come across as self-absorbed, overly dramatic, bragging persons. Although they are very friendly in nature but can seem superficial at times.

Virgos are intelligent, meticulous, analytical, and rational people. They are keen on solving problems. They always help other with their intelligence and wit.
On another aspect, they sometimes tend to take their work more seriously. This habit creates disharmony in the group they are in. They won’t go with the flow and hence their presence, sometimes, feels like a disturbed atmosphere.

They are mediators. They habitually treat everybody well and maintain stability in their lives. They do not participate or encourage turmoil of any sort.
On another aspect, they often struggle with the fact that constant balance isn’t always possible. They are unable to stand up for themselves and tend to avoid conflict.

Scorpions are witty and humorous people who keep the environment light and happy. They believe in the proper orientation and have an independent and passionate lifestyle.
On another aspect, they can be nasty and revengeful at times. Scorpios do not like feeling betrayed or challenged, so instead of losing their temper and yelling, they simply walk away and start plotting revenge. Watch out if you know a Scorpio because it can get ugly fast once you cross them.

Sagittarians are fiery, adventurous, and a fun company to spend your time with. They are very attentive and intense beings.
On another aspect, they are not good at focusing on one task. They suffer from temper issues and get easily annoyed at small things. When they are angry, they tend to forget their limitations.

They put in an immense amount of effort. They always want to achieve perfection and success. Capricorns are not easy to maneuver from their path, as they know where they are going, and head on in full force.
On another aspect, when they become successful, they get into the habit of boasting. Through a sense of superiority, they are often hard to work with, given their immense stubbornness, and non-adjusting nature.

Also Read : Find Your Perfect Career, According To Your Zodiac Sign?

People born in this sign love to meet new people, travel and experience new cultures. They enjoy anything that challenges them.
On another aspect, it is difficult to stay in love with this sign because they are not available most of the time and are emotionally detached from people. As they move about the planet, their priority is never their significant other.

Pisces are very empathetic and make wonderful friends and partners because of this. They are loyal to their loved ones and will do anything for them.
On another aspect, they are frequently searching for an approach to escape from reality. Numerous Pisces tend to push others away because of their craving to be distant from everyone else more often than not.