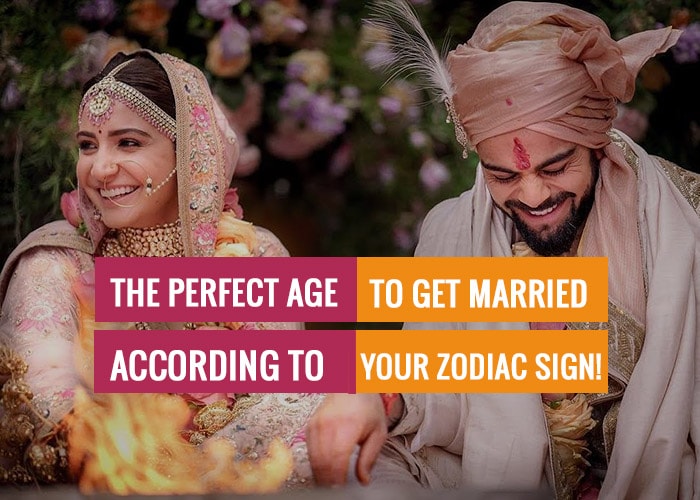 Marriage, the biggest day in everyone’s life and we always expect high from our spouse. No one can predict or tell which year is best for you to get married and at what age you should marry, but yes, by knowing the traits of a particular zodiac, you can decide the perfect age to get married.

Aries are generally eager to get involved in different things without having an idea about the exact scenario. So, all those who think that they are too quick to make a decision for marriage, rather they should slow down a little bit. Just give it some time and observe it. Do not take any decision in haste and let it happen in your life a little later, not early.

Since you are less reserved, thoughtful, and affectionate, you are known for long-lasting relationships. You are ready to get married only when you believe that all your needs are being fulfilled.

Gemini likes to have fun and enjoy their life. They can not afford boring and serious people, Therefore, it can be expected from them that they will marry in life when they will be sure of their partner. There is something in Gemini that they cannot deal disappointing person.

Also Read : How To Attract Him For Marriage, According To His Zodiac sign?

They want their spouse to be perfect with a perfect family. They like to be with their family. They are very sensitive, ready to give up everything in love. And this is one reason that they like to get married in early life.

The Leo zodiac is highly confident, and high on life. They believe in trust, trust others and fall in love. They fall in love for a long time and marry later in life. There is no proper or right time for them, they choose their own time and make it fair.

Virgo is generally career-oriented people, and are busy with what they are, whether they are related to their work or from marriage, they prefer to do it with their whole dedication. Because you know how to maintain the right balance, getting married at an early age is a good option for you. But it depends entirely on you, that you want to give priority to your job or your relationship or both.

The Libra zodiac is who is lovely, but when the time comes to make decisions, they have to struggle a little. They probably want to marry at a young age because they consider marriage as beautiful as roses. It can lead to problems in their later life. Therefore, you should marry only when you feel that your partner is exactly what you want.

Scorpio is one of the fastest zodiac signs. People of this sign are loyal, trustworthy and very passionate, but hesitate to rely on others, they develop their emotions to the extreme. And in their marriage, these extreme feelings can lead to many problems and obstacles. You should marry only when your trust and security problems are over and you do not rush into the relationship.

Also Read : The Perfect Wedding Dress For Your Zodiac Sign!

Sagittarius people love their freedom. They are courageous and like to travel. Their insistence on freedom of speech compels them to marry later in life, but if they fall in love with a partner who likes freedom, then they do not have to hesitate to get married early in life.

Capricorn funds are highly targeted, and their age depends entirely on them. One of the reasons for early marriage in their life is that they are responsible and play all their duties together!

Aquarius people love their freedom. But this does not mean that they do not like to be with their loved ones. If he is certain about his partner and if she too loves freedom, marriage is a beautiful phase for him and it will work in any age.

With the popular Pisces the symbol of fish, they are connected with the soul to their partner. You are entirely supernatural that make a deep and lifetime connection by just thinking about your partner. The age of your marriage can vary, depending on when you get your spouse.