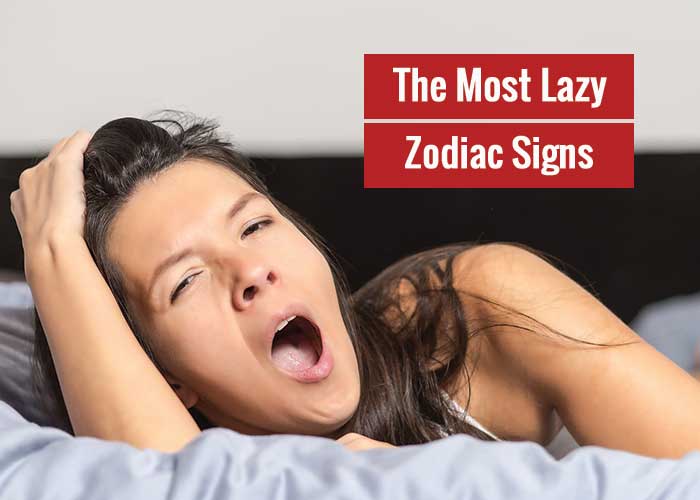 There Are 5 Laziest Zodiac Signs

Working on a holiday seems tiring? Yes, it may after all weekends are meant to take a break but if working on the working days seems tiring, what it can be? It can probably be nothing but a sign of laziness. More often our lethargic behaviour depends on our moods because laziness lies in every human being and it gets reflected at times. But few zodiac signs top the list of laziness.

Here is the list of the most lazy zodiac signs

For a Leo laziness is considered as one of the biggest weaknesses, and here their charming attitude can’t get it over. They are adored for their outgoing attitude but ends up being the laziest zodiac sign out of all. Leo are talented people and they love fame but are lazy as … and this makes them stand out as the most laziest zodiac sign of all. They want the limelight but will run away when it comes to work for it. Leo, you are passionate and creative, which is needed to be a great star but at the end, hard work is all that is needed. You love to be the centre of attraction and pull all the attention but without achievement, it may not last long.

They don’t like confinement and even the idea to get stuck in a particular thing may worry them. Sagittarius, you love to be free and maybe this is the reason you tend to be the laziest of all when you have to work within the four walls. It is not that you don’t want to work for it but you are not offering what you can, you are underestimating your own strength when it comes to work. You think you have lots of time but the fact remains you are running late. You give a lot of time to a particular thing that others get neglected. Though they are active people but are highly commitment phobic so be aware while dealing with them.

You may really get confused when dealing with Cancers as it may put you to have second thoughts on whether a Cancer is lazy or their work pace is slow. Usually, you won’t find a Cancer more productive as it all depends on their mood. And in their free time, you will see cancer being the laziest of all as they will keep thinking of what to do next without moving for it. They feel home the safest place and you may find them lying on the bed the whole day when it is a holiday.

If you are scared of the nature of Scorpio and feels like they may sting you back, you probably don’t have to worry about it. They are one of the most lazy zodiac signs and will not take the trouble to turn back to sting you, they will move ahead instead. Though they are filled with enthusiasm and are determined people their laziness depends on the emotional conditions going on in their life. They don’t need motivation to work as they work wholeheartedly but an emotional breakdown can make a scorpion a couch potato, sitting under the bedroom for the whole day.

If we talk about humanity and social cause Aquarius top the list but you may be surprised to see Aquarius on the most lazy zodiac sign list but you probably don’t have to as they are lazy People when it comes to work. They are talented and intelligent people but quite often they don’t like the idea of working hard. They will give you verbal support but may hardly work for it.

Also Read : How To Overcome From Laziness?