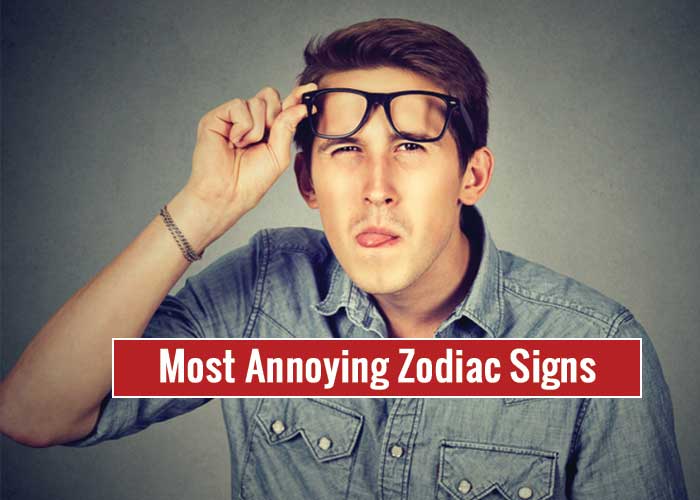 There are always some people around us who irritate us to an extent. Like, sometimes even their talkative behavior seems annoying. Being human we have many traits, it may be negative or positive but these traits sometimes end up annoying people around us. It’s nothing bad about it because yes, we are humans and we are meant to have all these qualities, be it a quality of annoying. Actually being annoying is also not easy so if you come up as the most annoying zodiac sign feel proud.

Since Leo wants the attention of all or say they want to be the center of attraction, it’s for sure they may behave a bit weird but it is not their selfishness, as they genuinely need attention according to their zodiac sign. They love to be praised either in public or personal. They have lionhearts which mean everyone can fit in it. At the same time, they are the most annoying zodiac sign of all.

Also Read : Most Humble Zodiac Signs According To Astrology

Capricorns are people who focus on practical goals and very logical. At times they may act very silly annoying everyone around them. Sometimes they can be mean as anything but don’t take it personally as their intention is not to hurt anyone but to get a productive result which makes them very rude and means sometimes making one of the most annoying zodiac signs. But being practical they are also trustworthy people who will be with you forever once they hold your hand.

It is said that Libra people are a bit shallow, shallow in the sense that they love the outer cover rather than going deep into matters. Since they are diplomatic in nature it seems to be the most annoying traits of a Libra, they try to balance everything and at that moment they lose their credibility. No doubt they try investing all their energy just to see a peaceful and pleasant environment around.

Sometimes being honest can annoyed the people around you and this is what happens with Sagittarius, they are brutally honest and that nature of theirs annoys few around them. Their boundless energy can be very heavy to carry and sometimes they can be very loud and obnoxious. They are also unpredictable as they can change their ideas and values anytime. But they care about the people they are connected with. So be chill to deal with them.

They are materialistic people and are very practical at the same time so if you get annoyed when a person talks only about materialistic stuff, stay away from Taureans as they can annoy you to an extent. They can get so crazy at times that will make you think about what’s wrong with them. They can be very lazy if they don’t see any materialistic or monetary benefit in whatever they do.

You never know what a scorpion is thinking because they are secretive as anything. They often annoy their close ones with their secretive nature. Since they are very passionate people they can become very angry and hostile in particular things, and yes, they are very manipulative people too and are considered to be one of the most annoying zodiac signs. They are intense and emotional people which is reflected in every phase of their lives.