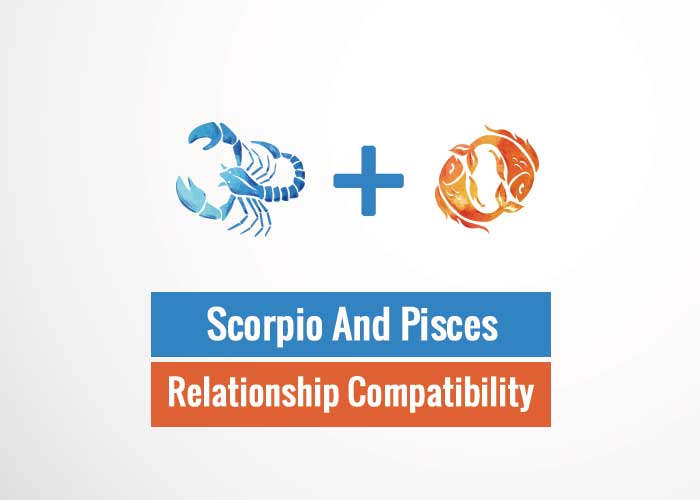 Scorpions pursue their passion with an uninhibited sense of dedication and do not give up until they achieve the success they are looking for. Pisceans love being around people and will go to the ends of the Earth to keep their loved ones happy and content. The biggest pros of Scorpio Pisces’ relationship is the almost unreal level of physical chemistry that they build with each other. They are both ruled by a common element (water), they relate to each other almost effortlessly. Their depth of shared emotions, their philosophical nature connects them so well that it helps this relationship to work on smoothly. To know more about them, let’s go through Scorpio and Pisces relationship compatibility.

Scorpio is intelligent, purposeful, focused, determined, mysterious, and extremely intuitive. Pisces star sign is one of the most creative, emotional, and understanding signs of the zodiac. They both hold traits that are enough to attract each other. Scorpio believes to function on intuition and instinct. And Pisces can adapt to their surroundings with ease and do not create too much fuss in adjusting to the company around them as well. This is the reason for their immense attraction and is also responsible for a sense of connection between them from the word go. They have the mutual attraction from the very first time they interact with each other and it only grows as and when they spend more time together.

Scorpio and Pisces relationship compatibility says that as they start to communicate and get out of their silent zones, they could easily get carried away in topics most signs wouldn’t understand. One of the problems that may arise in the communication process between them is either the roughness of Scorpio or excessive sensitivity of Pisces. It will be almost impossible to have a healthy conversation in which there will be no hurt, distance, or anger. But the perk of this relationship is they will rarely fight, for Pisces partner usually has no reason to fight with anyone, but they could have a lot of misunderstandings that lead to their separation pretty quick. Apart from this, if Scorpio partner can be tender enough and Pisces partner possesses the needed boundaries, their communication can be pretty exciting and magical

They both are deep thinkers. They understand others more than they understand themselves and it may even create problems at times. Both understand the beliefs and values each represents and have an ensuing sense of respect for each other. The emotional approach to everything in their lives will help them understand each other when it comes to rational choices. There will be mutual understanding in this relationship. They will be able to solve all the issues and will be in a happy relationship.

Scorpio and Pisces relationship compatibility says that there is an emotional depth to Scorpio that not everyone is ready to face and Pisces are ready to face anything in the field. of emotions. Scorpio represents rivers. Each river flows into the ocean or the sea, and this reflects the emotional connection between these signs in the best possible way. While, if any sign other than Scorpio is capable of understanding Scorpio, it is Pisces. The sign of Pisces represents our oceans and seas. Pisces partner will have the ability to disperse the intensity of emotion from their Scorpio partner. And this will allow them both to breathe more easily, for as long as they don’t cross the line and endanger the part of this depth that is loved by Scorpio. They will connect well with each other when it comes to emotions and that will help this relationship to head on smoothly.

Trust in Scorpio Pisces relationship will be maintained for as long as Pisces have an idealistic approach, doing everything for their one true love. But as soon as their image gets clear and they realize who they are with, what kind of person they are, and what their relationship looks like, it might become difficult for them to stay in the loop with Scorpio’s expectation of honesty. Suspicious Scorpio can easily become a clingy, control freak in a relationship with Pisces. And this may create conflicts at times. However, they will both be in search of their one, perfect love and this should bind them with certain honesty. If there is dishonesty in this relationship if any of them cheats or betrayed their partner, this relationship will end then and there because neither of them can handle tainted or polluted love.

Scorpio and Pisces love compatibility says that the biggest challenge for these partners is their relation to Venus, the planet of sensual physical satisfaction. Scorpio is a sign that represents sex, as well as sexual repression, and depending on the experiences, they can be a bit rough on their sensitive Pisces partner. Scorpio doesn’t care for Venus very much, leading it to its detriment, while Pisces adore it through exaltation. Pisces is a sign of orgasms, strange sexual experiences, and all of the sexual weirdness. If they understand the emotional depth of Scorpio, they might be much more resilient than we would assume. This can be very unfortunate if Scorpio dismisses this emotional need for Pisces to be satisfied and loved at the same time. As two Water signs, both Scorpio and Pisces find it very important for emotions to be the most intense part of their sexual experiences. Their sexual chemistry is a level above almost any other pair of the zodiac. They will be able to satisfy each other in their love life.

Overall, Scorpio and Pisces relationship will be filled with love, romance, peace, and emotional stability. The mysterious and erratic Scorpion is a unique partner for emotional and kind Piscean. As much as Scorpio values someone’s strength of character and depth, Pisces will value sensitivity and width. They will have enough energy to follow each other and it will be easy for them to find shared interests. There are a few problems that might test this relationship but their similar traits and interest will be enough to make this relationship a lovely one.