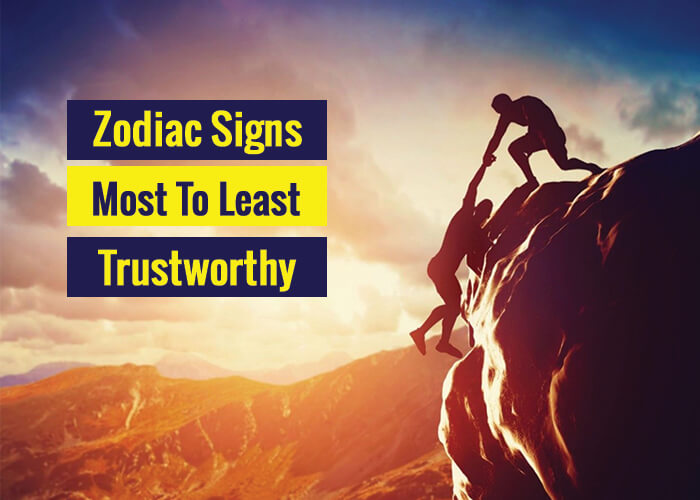 We often find difficult to trust people in the world which is full of liars. So, here we have actually ranked the zodiac signs from most to least trustworthy by recognising the signs from being emotionally charged to rational thinkers, or have the tendency to change their minds within the course of time. So scroll down and have a look at the “Most To Least Trustworthy Zodiac Signs”.

Capricorns can be counted as the most trustworthy zodiac signs in the entire zodiac family. They are one who can keep your secrets to the end. If they have promised or given their word and their commitment for anything then trust them because they will never break them or it t would take something extreme for them to not follow through with it. Capricorn sets some principles and they often make rules and wants to be an inspiration to everyone, so that’s the main reason what makes a Capricorn highly trustworthy and will always keep their words.

Cancers will do anything for the people whom they care and love the most and no matter what they will always be their side and that’s the vital reason why Cancerians ranks second on the list of the most trustworthy zodiac signs. Cancers are not the type of goody-goody but they have the powerful feeling of fair vs unfair and always seek to reside their lives with honesty and genuinity. In spite of this, what makes a Cancer different is that once a Cancer loves someone then they will love wholeheartedly and will always make sure to care and treat their love like their own family member, which means they will do anything for the well-being of their loved ones.

If you don’t know Libras properly than they may appear as attention-lovers, chattering box, indecisive partner and People-pleasing. Libra is the sign which is ruled by the planet of love and that’s why they understand love more and believe that love is more than flirting, it is persistence, it is the dedication and more importantly it is being reliable. Librans are the trustworthy zodiac signs who are super loyal. They can be so single-minded and driven as compared with other Zodiac signs once they have developed a trust in something. Libras are most dedicated and faithful individuals, once they have decided to be with you and will always be there for you till the end of the journey.

Sometimes Scorpios may turn out to be impolite and savage but untrustworthy cannot be added in them. Scorpions are intense individuals and they have the ability to love very hard and deeply and the reason is that they can blossom such feelings through attachments to people and that’s why they often end up hurting themselves. Nevertheless, they are the most loyal trustworthy zodiac signs in the matter of love and will do anything to make their lover feel protected and happy. You cannot trust them only as acquaintances but also the love and passion they carry with them makes them more committed, so once a Scorpio is with you than you don’t have to worry about anything as they will be with you despite any situation.

Virgos are trustworthy individuals as they are kinda over concerned guardians. They are always concerned about the well being of their loved ones and the people around them. If you want a Virgo to come to you by the way of anything than don’t hesitate to ask them as they will go through anything and will come to you, the fact is that you just require to line up with their own common aim and interests. If Virgos don’t know what they are doing with you or they feel they aren’t actually invested or interested in you then that’s the time Virgo gets detached from you.

You can always count on an Aries when they have strong belief what is right for them in the given time, they are so moved away by their internal counting of fair vs unfair and know how to quickly change their course of action to something that better suits them. Aries are extremely rational minded and once they found that the job or relationship is not going to be fruitful for them they will quickly back off from it. Aries is simply not like other signs who will stay by their lovers’ side through hook and crook, this is the sign who will be little cold and will end doing what’s benefited for them involving everyone. Aries are not the ones who are blind to their love and emotions.

Tauruses are the most loyal and dedicated signs in the Zodiac and that’s the main reason which makes them trustworthy. No matter what they will always be with the people they care for will do anything for them. Although there is also a different side of Taurus which is slightly dark. They are stubborn to the core and believes they are only right in this world, they will never do things that they disagree with. They can turn out to be brainless and are picky about things that don’t benefit anyone. Taurus can be extremely good lovers and friends but they are not trustworthy of the team.

You can count on an Aquarius only with formal things such as work-related settings as they are efficiency-driven individuals. Moreover, you cannot trust an Aquarius completely. They have unique ideas, thoughts and are often curious about innovating new things, so they don’t compulsory have the ability to concentrate and focus to execute the small plans. Aquarius sometimes can be egoistic and this usually creates a hurdle for them to be faithful and dedicated friends and lovers.

Having a symbol of twins, Geminis have reverse opinions about everything. They have incredible mood swings can immediately change or invert their mindset, you can often see them being in and out of relationship or friendship, either hating them or being bored with someone. This is the sign who can be unthinkable companions and lover, but they are not the ones who are committed to their word, and they aren’t naturally trustworthy individuals. However, what often comes in the way of Geminis is their emotions, a few dramas, or the thousand or an additional commitment that they have made in their past. So, that’s why they are ranked as least trustworthy Zodiac signs.

Suppose you share your secrets with a Leo, you can simply rely on them as they know how to keep the one. However, the fact behind Leos is that they have the tendency to do things which is simply best for them or their family members. They are surely the ones whom you can rely on to guard your prestige but are not always the shoulder to lean on in the times of dilemma. There is no doubt in their loyalty but they can be too stubborn and will not do anything until that doesn’t quickly serve their best interest, attract or annoy them.

It’s a misfortune for Sagittarius as they are often listed as the least loyal sign of the Zodiac. There are reasons behind their disloyalty. They just love to explore new places and have the hunger of experiencing new people and ideologies. Once a Sagittarius choose someone whom they find really interesting that they will get highly committed to their family. The fact is that this sign gets captivated by their own interests and beliefs, they usually like to be selfless but sometimes they really get fail to be the one.

Pisces is the sign which is the most adored in the Zodiac and are highly artistic goal-oriented. But they are found mostly at every place. It’s not that difficult for them to control by their creativity, and they often find very difficult to face things, or picking up practical plans and holding it for a longer time. Pisces are great lovers however, they are not the kind to hold on a relationship when the things start to get very difficult, they will not hesitate to find someone who is better or something inspiring. Pisces are very nice individuals, but they are not the one whom you can trust completely. They have uncontrollable minds and it often fluctuates from one way to the other. So, that’s the reason why Pisces is ranked as the least trustworthy zodiac signs.