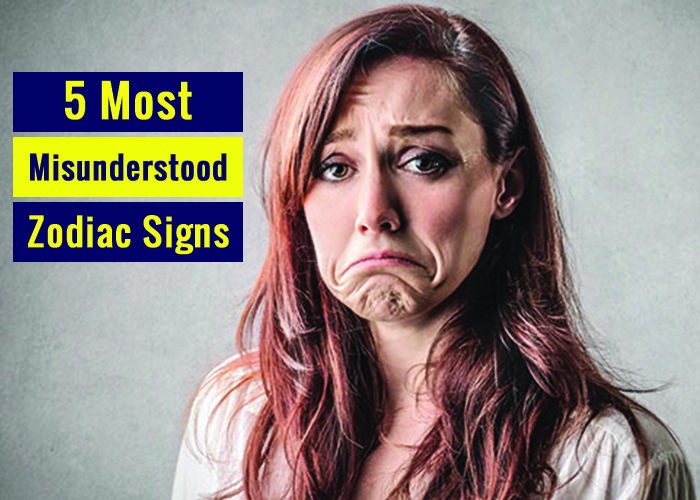 You don’t need to wonder why an Aquarius is the most misunderstood zodiac sign. This individuals often annoy others and doesn’t leave any hint behind it. You may often see an Aquarius being detached, rude and cold with others, actually this individual often feels socially awkward and can’t decide what they need do next They are often misunderstood because of their doesn’t matter nature or being indifferent to all the things. In reality, they care a lot about everything, but they just have zipped their mouth or can’t open up their mind.

How misfortunate is Capricorn for being a workaholic, serious-minded, and dutiful. They are misunderstood of being uninterested in sex. But in fact, Capricorn individuals are naughty, amusing and jolly. They work very hard as well as play very hard. They are awesome at entertaining others and if you get any chance to see Capricorn hosting a party then just don’t miss it.

Scorpios are often called intense and even are called pessimistic and negative individuals. But this is not the truth, just like others, Scorpios also have a bright side. Scorpios have an awesome sense of humour and are usually very encouraging and positive. They feel everything passionately and deeply but that even add the feeling of jolliness and cheerfulness. They may not show their emotions but that doesn’t mean that they are heartless. Scorpios are most misunderstood because of their deep and hidden emotions. That’s why Scorpio is among the 5 most misunderstood zodiac signs.

Most misunderstood star sign, Gemini. Geminis are often called liars, two-faced, and in the process of manipulating others, they even don’t mind to tell people what they actually want to hear. People believe that Geminis are not honest and they usually wear a mask. But the truth is that they hardly lie, except it’s a white lie, and are very honest with everything. People believe that Geminis are irresponsible and immature, but the truth is that they are the most responsible and down to earth.

Virgo is also among the most misunderstood zodiac signs. People tend to believe that Virgos are perfectionists to such a degree that they don’t have any time to enjoy. Virgos are often tag as boring, dull and uncreative individuals. But that’s not the truth, In fact, they are most interesting, creative and caring individuals. They are the most dynamic individual and has the ability to change others minds without letting others realize about it.