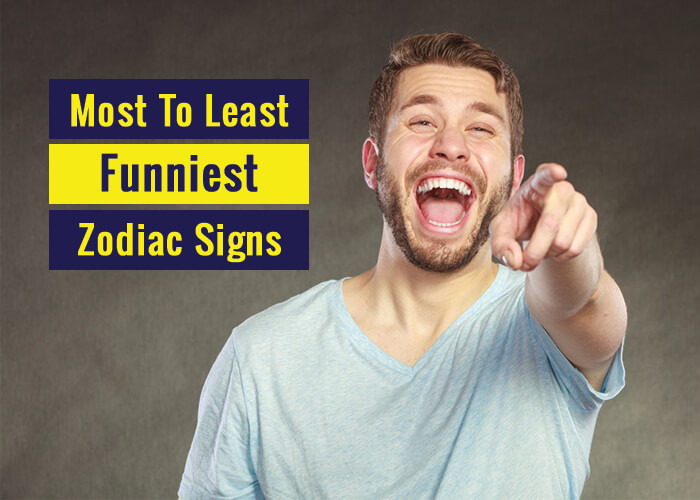 Have you ever thought about which Zodiac sign is most funny and which is least funny? So, here we have listed most to least funniest zodiac signs. So, check it out where you have been listed.

People born under this sign are most social. They love to entertain others and that is why they are listed first. They are so lively and will just sway away the energy of people and their hobby is to make others laugh till their stomach hurts. In the process of entertaining others, these individuals even don’t mind to make anything turn into embarrassment. So, how can we forget to tag them as the most funniest.

People born under this sign genuinely loves to make every individual laugh through their funny and detailed stories. They can turn any tedious and uninteresting situation into a cheerful and amusing story. You may find these individual narrating the funniest story in a party where everyone would spit out their food or drinks because of laughing so hard till their stomach hurts.

Geminis are the ones who love to crack jokes and will always be the first bone to do so. They may even crack jokes on other people expenses or lifestyle, but not in a mean way. They can turn out to be irresistible when it comes to people but there is some kind of hidden cuteness in this behaviour because they just want to teach people how to laugh at themselves. You can tag them as most funniest Zodiac Signs.

You may sense the Scorpio’s humor being a bit ruthless as compared when you don’t know them completely. But if you get to know their complete personality, and they are just expressing their jokes in a passive-aggressive form, but also in a funny manner. So, you will never find to laugh so hard in their jokes.

Oh! How can you forget to tag them as the Queens and kings of sarcasm? People born under this Zodiac sign will never mind using their humor to poke fun at themselves so that they can turn any situation funny. They may even narrate any story of their life in a funny way even if it is the worst story of their life. These individual are not afraid of what people think about them and never mind to use their humor in any stressful situations.

People born under this Zodiac sign has a very dopey way of expressing their humor. They will often use their body language and manners to make people laugh. They are especially funny because they will express their humor with words and mostly show them through their actions. You may find them as entertaining and will love laugh and hang out with them. So, it’s very hard not to tag them as the most funniest Zodiac Sign.

People born under this Zodiac sign can be either funny or serious because they will be humorous in certain situations but sometimes it can turn out to be a little too much when they try to be funnier. They will use exaggeration and lots of adjectives to create a funny story. This often goes well but sometimes it turns out to be a bit melodramatic or kind of show off.

This is the sign who loves to narrate long and amusing anecdotes. But the main problem is that they get little affected by people. They may completely get lost while telling a funny story and they even forget that they have lost interest on others. They are trying so hard and it’s really adorable but sometimes accepting that the story should end without rip-roaring laughter is better than trying to make everyone around you laugh. So, it’s better to tag them as the least funniest Zodiac signs.

People born under this Zodiac sign are very non-resistant in the matter of their humor. You can tag them as funny without trying but you need to pay very close attention to them. They are the ones likes to laugh at others jokes rather than making them.

People born under this Zodiac sign have a sense of humor but it’s a bit self-critical than others. They shall feel that they are being funny and straightforward; people can judge them as being mean and insulting. Instead of being blunt Cancerians should try and find a little lighter humor. So, better to tag them as least funniest Zodiac Signs.

This is a sign that doesn’t show much humor in their emotions. They usually keep a serious face. They don’t find anything funny at all. This needs to be a little more entertaining and this can only help them to break their seriousness. Capricorns, you need be little more humorous in front of others and try to laugh at themselves.

This is the sign that is not that open sign and you can imagine how they can be with their humor. They will get more passive and not show their emotions and will get a little detached in certain circumstances. Aquarius, it’s better to show up your personality and crack some jokes and this will not make you weak. Too serious to be the least funniest zodiac signs. Aquarius, you don’t need to get serious about everything.