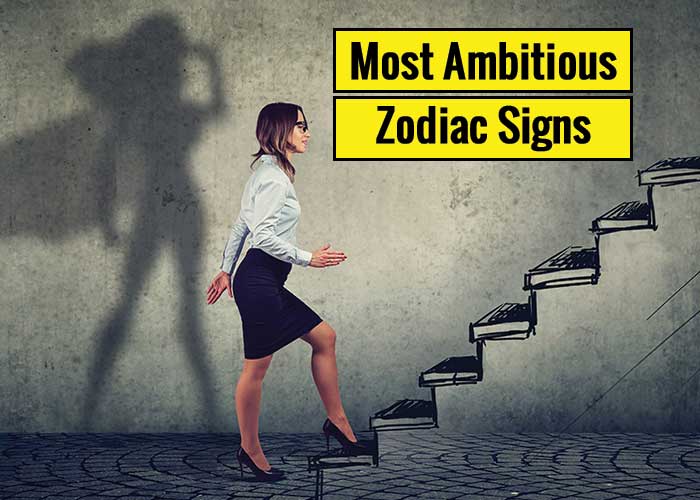 An individual happens to be goal-oriented, though being ambitious may not always relate to name, fame or climbing ladder of success, sometimes, it means to improve your and your family’s lives. And there is no harm in being ambitious, there is no harm in chasing name, fame, heights of success, but this ambition should not lead in losing your ownself. Being ambitious will help you to grow more as the want to achieve more in life is what keeps us going, helping us to move forward. Every individual is ambitious in life in one or another way but here is the list of the most ambitious zodiac signs.

Leo is a born leader and they love to lead. The thirst for power and to lead the herd makes Leo the most ambitious zodiac sign. They are smart and are confident enough about what they can do and how and how to achieve their goals. They are always planned and know which step to move next. They are ready to help and are ready to ask for help. And that nature of Leo even helps them to climb the ladder of success soon.

Bull-headed Taurus are bull-headed when it comes to ambition too. If they want something, they are not wasting their time on other things nor moving out of it. They will stick to it until they achieve it, they are the most ambitious zodiac signs who is passionate about their goals in life. They are materialistic in nature and the desire to live an expensive life makes a Taurus more ambitious and career-oriented. And they are even ready to work for it.

Also Read : 5 Zodiac Signs Most Likely To Get Fired From The Workplace

Aries are very ambitious. They dream of becoming rich and that nature pushes them towards being ambitious. They are ready to work for it at any cost. They are not only goal-oriented but also loves competition. They are filled with energy and is ready to invest that energy in achieving their goals.

Also Read : The Most Humble Zodiac Signs According To Astrology

They are known for their confusing nature and this may seem like they are not ambitious but this is not the case. Geminis are confused but when they decide to do something they are the most ambitious and passionate zodiac sign. They know how to use their skills and talents to accomplish their goals. They are an amazing communicator and this helps them to climb the ladder of success. And the best thing about Gemini is that they are not greedy, they know that their skills and talents are going to bring success for them.

Scorpions are determined in nature. They are stubborn when it comes to achieving what they have decided to. They are hardworking and know how to use their strengths to achieve their aims. Never underestimate a Scorpio’s intensity as when they set their goals nothing can pull them back, nothing can stop them. Scorpios are ambitious and they believe in climbing the ladder of success slowly but they make sure they reach that top.

They are not ambitious for themselves but for their dear ones. Cancer uses their intuition power to reach their goals as it acts as a guiding principle. Cancers are generous, kind and lovable for their nature. And this nature of theirs helps others to achieve their goals and they encourage other people more. Cancers are kind-hearted but at the same time, they are also ambitious.

Also Read : Most Dominating Zodiac Signs According To Astrology

Aquarians are ambitious but their ambition is for the society rather than for themselves. They want to either change or repair something in the world. They love to work tirelessly for society and are willing to work to make this world a better place to live in. They are creators who love creating and want to show this to the world. Aquarius wishes to be at the top and that makes them more ambitious in life.

Also Read : 5 Most Flirtatious Zodiac Signs According To Astrology

This perfectionist is perfect even when it comes to their goals. They are ambitious but at the same time they are careful, they won’t step to the field without doing their homework. They are always ready with lots of research and background work whenever stepping for their ambition. This makes Virgo a perfect sign who is ambitious with perfection.

Pisces are ambitious but in their field of creativity. They want to follow and not lead but it doesn’t mean they are not ambitious. They are ambitious and want to make their name through their artistic skills. They are very imaginative and they visualize things and are very ambitious to achieve it.

They are ambitious but are not ready to do anything for it especially they are not ready to climb on others to achieve success in life nor is ready to be aggressive to acquire it. They will wish to achieve it in the calmest and composed way. They want this world to be in peace and want people in it to be good and behave well. Sometimes this nature of Libra for seeking peace makes them lost in their own quest.

Also Read : Astrological Fun Facts About All The Zodiac Signs

Busy in the world of adventurous and striving for more. They are ready to work hard for their goals unless these goals confine them. Sagittarius is more into gaining experiences and will love to build relations than to possess money or power. When the world is running behind money and power Sagittarius is enjoying its own wave of adventures and journey filled with energy. They are known to be one of the least ambitious zodiac signs.