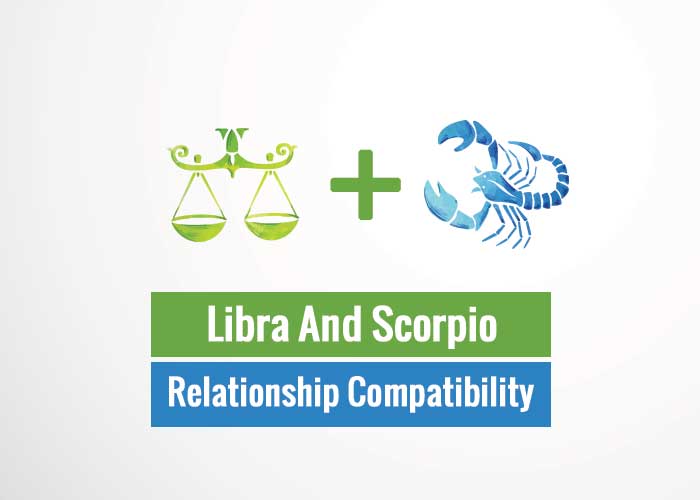 Both signs value commitments and togetherness, which can make their relationship work. However Libra and Scorpio might not get along well for long unless if they are determined to keep their burning passion alive. Because Scorpio is a dominant sign who likes to control their partner but with Libra its different cases, as Libra is an air sign who wants to be free like air and needs to be in their will. So they don’t like to be submissive one for Scorpio. A Scorpio needs to understand and Libra needs to be a little more attentive towards Scorpio if they want to make that equation. To know more about them lets go through Libra and Scorpio relationship compatibility.

Also Read : How To Attract A Scorpio Woman? Find it out

Scorpio is a less expressive, more secretive sign and Libra, on the other hand, is a more social and charming sign. This opposite thing may attract them together. Scorpio needs a partner who can make them open up a bit and Libra is just so curious about knowing mysterious Scorpio. But Libra beware, don’t ever touch Scorpions sensitive self, they might sting you with harsh words. However, Scorpio is very compassionate in nature which Libra will admire the most.

Also Read : How To Attract A Scorpio Man? Find it out

Libra and Scorpio’s relationship compatibility says that both the signs need facts and figures when they are taking but that doesn’t mean they will not talk about their feelings. They are indeed good observers and deep talkers. Both of the signs are humorous in nature. But however, Scorpions are blunter when it comes to using words. Scorpions can sometimes hurt Libra by their words. Because Libra isn’t the one who likes to hurt verbally. Both of the signs may contradict each other’s opinions but will always share an interesting bond. While talking both of them sometimes tries to test each other and tries to dig out the unspoken words from one another.

Also Read : How To Attract A Libra Woman? Find it out

Libra might struggle understanding Scorpions as Scorpions are very intense in nature. They feel too much, they do too much. It is their nature to do sacrifice. And Libra might take it in another way if Libra isn’t looking at the other sides of it. Libra has a very doubtful mind, they are very indecisive about things which can often reflect in understanding others. So sometimes it’s their confusing nature that can lead them to misunderstand Scorpio. Because Scorpio isn’t always so expressive to explain everything in detail. So Libra might don’t understand the silent Scorpio and will think Scorpio is so cold. But that is not the case, Scorpio is a fixed sign and they also seek stability, which is why sometimes they can become more stubborn, and they may also fail to understand Libra’s point of view. But regardless of their misunderstanding, they will stand up for one another, because they have this other side which will lead them to think twice before blaming each other, they try to look for their own mistakes. So they may find it hard but their understanding in a relationship is not bad.

Also Read : How To Attract A Libra Man? Find it out

Libra and Scorpio relationship compatibility says that they will pour their heart out when they express emotions. They will love to be vulnerable with each other because they both are so good listeners and good observers that when they are talking it’s almost like they are sharing their art of the piece. As both of the signs are emotional and passionate lovers, their emotional connection is way stronger than their other parts of their relationship.

When it comes to trust. It is hard for both of them. Because Libra sometimes doesn’t understand themselves. And Scorpio sometimes can’t handle themselves. One extremist and one very easy going in nature. This opposite behavior can create a lot of chaos in building trust. Libra is very doubtful and Scorpions are very jealous types, they may don’t agree to this but when they are jealous of their partner, they will hurt them badly. And Libra doesn’t like to be blamed because when they are hurt they balm others the most. That is why it can be very challenging to build strong trust in them. However, if they become more self-control and be a little more determined towards their relationship they can pass this too.

Libra and Scorpio love compatibility says that they are linked through their animalistic natures, continuing one another, ruled by planets that also rule their opposing signs. This is an intense couple in every way, and their sexual relationship is something fascinating and challenging at the same time. Libra and Scorpio will have a complicated sexual contact, for they are ruled by Venus and Mars, as if they were made for each other. Even if they don’t make each other happy in other parts of their relationship, when a Libra partner lets go to their instinctive, animalistic side, they easily become one with their Scorpio partner. They seem to lack the touch of the element they both need, separated by the quick, superficial element of Air in Libra and emotional, the slow element of Water in Scorpio. Their sex life can be incredibly emotional and demanding, for the pull of their energies is extremely strong and makes them both obsessive and possessive to one another. Libra and Scorpio will get so bound in the relationship that seems impossible to break and this tie is created due to their physical contact even if they are deeply unsatisfied with everything in their relationship.