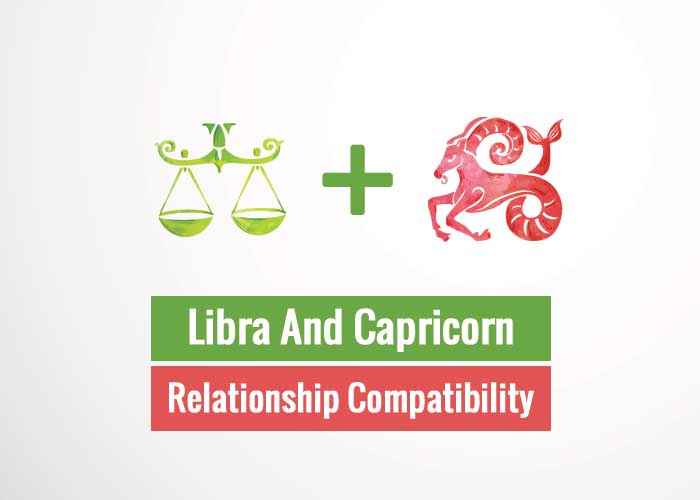 Libra is an easygoing, friendly, and laid back sign. Of all the zodiac signs, they probably are the easiest to get along with. Whereas, Capricorns are careful, conservative, patient, and down to earth individuals. They are one of the most hard-working and least extravagant signs of the zodiac chart. The most important values Libra and Capricorn share are the value of time and taking responsibility. But despite everything, this relationship will suffer to be successful. To know more about them lets go through Libra and Capricorn relationship compatibility.

Libra is balanced, composed, and calm individuals. And these traits of Libra will impress this ambitious Capricorn. Whereas Capricorn is very stable and serious, Libra may find it hard at first to cope up with them but Capricorn’s nature of taking life seriously and their continuous search of knowledge and achievement may attract Libra folks. They hold traits that become the reason for their attraction, in no time they will be soon in love. Though they are completely different individuals as a whole and love between them is something hard to find but they will get attracted due to their traits and their behavior towards each other.

Libra and Capricorn relationship compatibility says that communication between them may not be that healthy. Libra is not that stubborn, but when they find themselves in a relationship with a Capricorn, they suddenly become headstrong and sometimes even impossible to talk to. Communication between them may always end abruptly, it will be hardly productive as they are more into “I” than “we” when they talk to each other. Even though Libra loves Capricorn because of Saturn’s exaltation, this is shown in the most unusual way, for they seem to feel the need to speak out of spite. And this can lead to a long battle with no winners or losers but two people building walls between each other and that also for no reason clear to anyone around them. If they remain rational in their mental relations, they could have a lot of fun that other signs wouldn’t be able to understand. And even they will be able to communicate with each other in a better way.

Libra is a gentle and non-judgmental individual who does not take rash and impulsive decisions in life, they may try their best to understand their partner but Capricorn’s nature may affect this relationship in a way, they might end up paying no attention to their relationship over time. Capricorn is extremely career-oriented and tends not to express love very often. This couple may find hard to balance mutual understanding in their relationship. The biggest obstacles to their understanding are the elements they belong to, Libra is an Air sign and Capricorn is an Earth sign. They are too far apart and it seems unclear to these partners how to reach each other on any issue in life.

Libra and Capricorn’s relationship compatibility says that there is a really high level of trust between them. At times Libra can have questionable motives but a Capricorn partner will make them turn to Saturn completely and feel guilty at the smallest glimpse of a possible lie. one of the problems that surface is when a Capricorn becomes too strict from the start, making their Libra partner feel inadequate, judged, or even scared of the consequences of their actions. And this may make Libra Capricorn relationship dishonest, not because there is actually something to hide, but because Libra partner feels the need to protect themselves by holding on to their privacy. It will require effort to deal with it and it can only happen when they both put a continuous effort into it.

Libra is a sign ruled by Venus and their emotions come naturally, but they usually try to restrict it and hold it back due to the seriousness of their nature and the fear of judgments by others. Capricorn accepts all emotions, and in most cases, unless enlightened, they will be this judgmental force that holds Libra down. And the entire situation will feed Capricorn’s ego and make them think they are right about their approach, leading them further away from their focal point. One of the hardest things to reconcile in the Libra and Capricorn relationship are the ways they approach their feelings. They have to work hard on finding a shared language to show how they feel and still respect each other. The emotional bond that they share with each other is very fickle and does not gather substance. If they allow each other to behave freely and express freely they will be able to connect with each other emotionally.

When talking about Libra and Capricorn love compatibility, the first thing that comes to mind is waiting. When it comes to sex, this is a combination that could point to a lack of sexual activity, even though both of these signs find sex essential in their lives. They might feel no attraction at all, and even start a relationship on a basis formed in friendship, only to realise that there is no chemistry between them. Both of them could feel pressured, and their self-esteem could suffer greatly in this relationship. If they are successful in overcoming all the obstacles, but still they will have sexual relations that are pretty conservative, routinely approached, and only satisfying if they both let go of their strict premises and conditions. This relationship will lack sexual satisfaction to be precise.

Overall, Libra and Capricorn relationship compatibility says that one of the best things this couple can do together is to look boring to the rest of the world. Libra Capricorn relationship is not an immediate hit from the very first date, but can definitely turn into something substantial over time. They need to keep their passions lit and create a weekly routine that will make them get out of the house and do something fun and even help this relationship to go on.