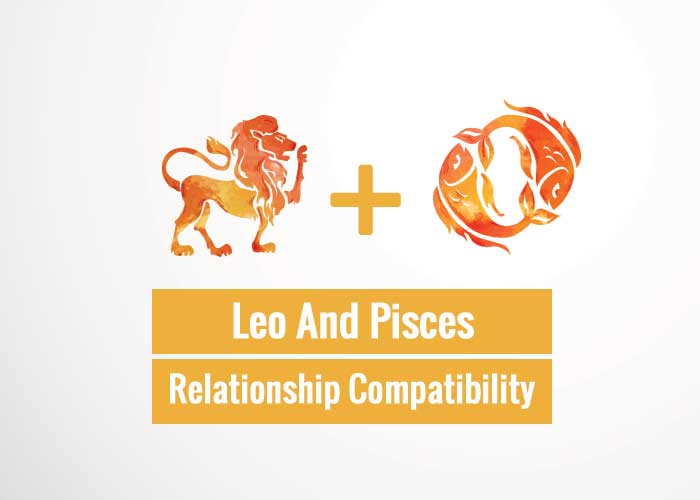 Leo and Pisces are two contrast signs. If one is fire, the other is water. They are completely opposite from each other. It is difficult to predict whether two completely opposite personalities will emerge as a successful couple or not. Leo has a very adventurous, lively, and impatient nature which will make it difficult for them to survive with Pisces who like to do things at their own pace. Leo might start feeling that their independence is at stake because of the possessive nature of the Pisces. Piscean’s intention might be clear and pure but Leo might think that their freedom is under threat and this may create more conflict. To know more about Leo and Pisces relationship compatibility lets go through it.

Creativity attracts attention and it won’t be wrong to say that a Leo will get attracted to creativity and the creator too. Pisces may find generous Leo attractive and an ideal person to spend the time with. In a short span of time, they will get attracted to each other. There is no doubt that their characters, traits will pull each other and soon they will be in love, but will this attraction last long? Leo is a fixed sign and Pisces is a mutable sign so it is hard to say that this attraction will last long, especially when Pisces is ready to change anytime.

Leo is a warm sign, very passionate about their doings and their desires. And Pisces will rarely show the same initiative to realize any of their dreams and this creates a big difference. Leo shines a light on our virtues and shortcomings, they will not miss a chance to show their Pisces partner how unrealistic they are in their nature and approach. This could help Pisces build a more realistic approach, but it could also affect their confidence and hurt them through a difficult perception of the world. Ideals Pisces have could be shattered by the approach of Leo if they get too close to one another. The best way for them to create a safe surrounding for both partners is to stick to the subject they are individually interested in. They could share many interests due to the creative power of both signs. Leo and Pisces’ relationship will be filled with healthy conversations only when both the partners want and allow it to be.

Pisces is the sign ruled by Neptune, and Leo brings it to its fall. Neptune is a planet of all deceit and mistrust in the world, making things around us seem foggy, unclear and fake. They will both seem dishonest to one another, not because they lie, but because their characters seem unreal. This is a difficult combination of signs to reach a point of mutual trust. Leo will think of Pisces as if they were always high, and Pisces will feel sorry for Leo and their lack of faith. Leo and Pisces’ relationship will lack trust and this may affect their relationship a lot.

Leo belongs to the Fire element which makes them passionate and gives them the need to fight for their loved one and their emotions. Whereas Pisces is a Water sign, and much more passive, showing their passion through the flow of emotion. Both of these individuals are extremely emotional, each in their own way. The middle point for these partners is in their realization that not everything needs to be won, as much as not everything should be uninfluenced. This is not something that happens all the time, and sometimes things need to be let go because they don’t belong to us, and we don’t belong to them. They will rarely fight for anything, convinced that perfection doesn’t need fighting for and that real treasures are spontaneous and free of conflict.

Leo and Pisces love compatibility says that the best way they can sustain their sex life is by building emotional trust first and worrying about sexual satisfaction later. It is incredible how two signs that represent love, can be so wrong for each other. Leo will seem like a brute, caring selfishly about their own needs, incapable of forming an intimate relationship with a Pisces. Though this is not true, it might be the obvious reality to Pisces if they end up in a relationship with Leo Partner. Leo will think of Pisces as weak and unrealistic, completely separated from their own desires and the strength of their body or emotions. One of the main problems of Leo Pisces’ relationship is in the fact that the sign of Leo is a sign of the fall of Pisces’ ruler, Neptune. This means that Leo will burst the bubble of Pisces and endanger their sensitivity, idealism and go against their beliefs. And that will ruin the romance between them and make it impossible for them to find any magic while they are together. Their roles and characters seem to be too different for them to find a way to coexist in a satisfying sexual relationship. They can both be incredible lovers but they will rarely discover this together.

Overall, Leo and Pisces relationship will be full of passion, warmth, and dynamism. They both are expressive when it comes to revealing their feelings to each other. The biggest advantage of their relationship is that both of them believe that love has got secret powers to fulfill their lives. Though going through their compatibility one can say that they are not made for each other and their relationship may not be that healthy. This relationship will test the patience of both individuals. The lion needs to take care of their aggressive behavior while the Pisces need to control their idealism in order to make this relationship work smoothly.