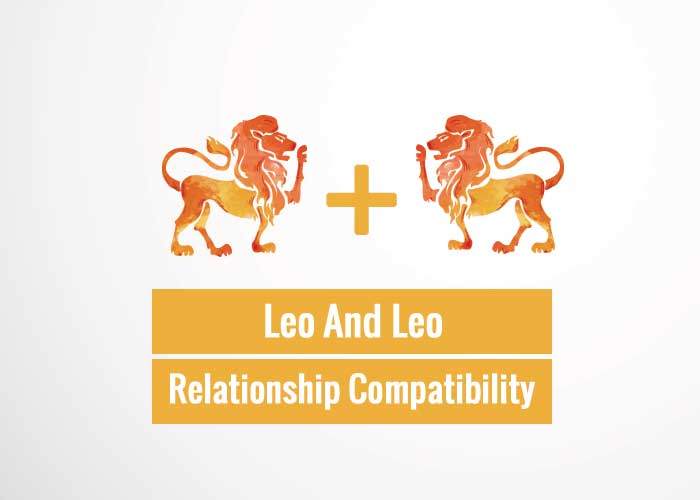 Both of them share the same energy, the same passion, and boldness. Both of them are competitive in nature and as a couple, they both can live their life partying, and challenging one other. This relationship can be extremely passionate and dramatic as both of them are ruled by the sun. But the pride of the sun’s energy can reflect on their personality which is why sometimes their ego can cause trouble in their romantic relationships. To know more about them lets go through Leo and Leo relationship compatibility.

Leo and Leo’s relationship compatibility says that they might not be highly attracted to each other but they will always love each other’s confidence and pride, they will have that sense of belonging which can pull them to form a good bond. The attraction may not begin immediately but as respect will increase, the attraction will follow accordingly and it won’t take that much time for the pair to fall in love with each other.

They are highly compassionate signs who try to help each other in times of need. They both can understand themselves easily because Leo’s are not so much good at expressing feelings, because of that both Leo can understand their unexpressed emotions. However, as far as they are compassionate, they are very egoistic too, because of which they might fight very often and try not to listen to each other’s opinions and sticking their point, being stubborn.

They will talk about luxury stuff, new car or dress, as Leo they are damn materialistic and they often get caught in the conversation on new brands and fashion. Having similar interests can bond them very well. Apart from materialism, they are also creative souls and dramatic too. Because of which they will never leave a chance to make their conversation interesting. They will enjoy each other’s company.

However, when it comes to trust, they might have self-doubt which can lead to creating some trust issues. As they want to do everything perfectly and want to be on limelight all the time, so the insecurities will be there inside them. And because of that, they might doubt their partners too. They get jealous so very easily. Leo and Leo’s relationship will sense a lack of trust at times due to their nature but as they start knowing each other more, they will start trusting each other with the flow of time.

Also Read : Zodiac Signs Who Loves People That They Can’t Have

Emotions are not really their cup of tea, they can control their emotions. As the fire sign, they are a highly passionate and aggressive sign, which is the reason being vulnerable in front of anyone is a sign of weakness for them when in reality it is not true and they also want to express themselves. But their ego and pride are more valuable for them, that is why both of them will be controlling their emotions. As they suppress it so much that at times, they might burst out in anger, because of uncontrollable emotion.

Leo and Leo love compatibility says that the combination of two Leos can be difficult when it comes to intimacy, but their sex life might be excellent even when they are not intimate at all. They usually search for partners that can help them show their core in order to really connect instead of simply having sex as an instinctive act. And when two Leos will come together they will feel that connection making their sex life interesting and fun. Leo’s warm nature and passionate approach to all things in life, including sex, will keep them satisfied together for a long time. But there may arise a problem as there is a face behind the act to both of these partners that they might be too proud to show. And the problem will be that two Leo partners can have is their boundaries and the possible lack of respect they have for each other. This couple will enjoy being with someone who is so confident, they might hold on to the image of confidence for way too long until all sorts of insecurities surface. But it will be difficult to develop closeness with all that fire in one place and when you think about it, there is only one Sun in our Solar system and everything revolves around it. It can be said that Leo Leo’s relationship will be filled with love and there will be enjoyable but the level of satisfaction depends on their approach.

Also Read : The Most Stressed Out Zodiac Signs