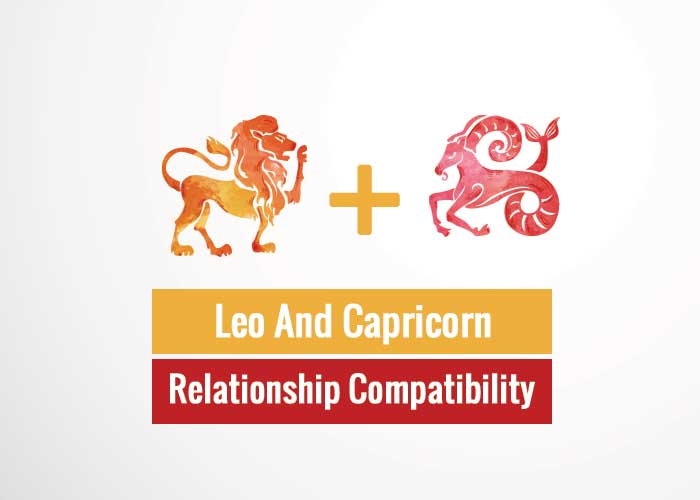 Leos are natural leaders and are amongst the most strong, powerful, and ambitious sun signs. Capricorn is a sun sign that cherishes steadiness, sensibility, and stability in life. Leo is a fire sign and Capricorn is an earth sign. They stand out to be quite different from each other and their equation is exactly like the fire and the earth. When talked about Leo and Capricorn’s relationship compatibility Leo values direct, open-hearted people with big smiles, and as soon as they judge Capricorn for not smiling all the time, they might as well end the relationship. So, to know more about this risky relationship lets deep dive into their compatibility chart.

Leo and Capricorn both value well-organized people, presentations and plans. This similar preferences can bring them together. If their similar traits pull them towards each other and act as an attraction, their mutual differences will help them learn a great deal from each other and help create well-rounded, complete relationship compatibility between them. But, it will be their dominating nature that may part them ways. They may get attracted soon but as time passes by this attraction may not last long. It all depends on the situation for them to make this relationship go on.

The main problem in Leo Capricorn relationship is the set of priorities they might not share, and the passion or determination that both of them have. It may be hard for the couple to understand each other and the set of their priorities. They both are lively but not optimistic in nature. If one lives in the present, the other lives for the future. This different approach towards life will act as a hindrance in the way of mutual understanding. And one can make out that this relationship will lack understanding.

They share some similar traits but their priorities differ greatly, and they both have a strong set of personal priorities in their lives. This is something that will not be easily reconciled and these partners may waste extra time trying to prove to one another why each of them has a point on what comes first. The problem is in the lack of understanding that each one of them has its own mission and its own role. It is futile to insist on someone’s priorities changed when they should be different, to begin with. If they respect each other enough to accept some pretty big differences, their communication might be very satisfying and fulfilling for both of them. Capricorn will give Leo the depth and the serious intentions they need. And Leo will help Capricorn find a more positive and creative view of every situation. When they combine their abilities to organize, any plan made could be perfect.

Leo and Capricorn relationship compatibility says that the depth Capricorn is prepared to go to makes Leo partner question their own motives and their whole personality. Capricorn knows that Neptune falls in Leo. This is exactly why they also know what hides behind the act in their Leo partner. In many situations, they tend to trust each other because it gets so obvious that there is no reason not to. Lies seem to be impossible in this relationship, for each lied told, comes right back. As much as Capricorn sees behind the shine of Leo, Leo shines a light on Capricorn’s darkness. Hardly things will be hidden for long and as soon as one of them tries to stay secretive, mistrust is awakened.

Both Capricorn and Leo are practical beings, they are logical in nature a relationship between them can be truly emotionally challenging, not because they don’t love each other, but because they do. The time Capricorn needs to build the emotional story they need will be roughly interrupted by their fiery Leo partner. Warm emotions of Leo are easily cooled down and buried, and without the ability to express love, Leo can become pretty depressed. The problem with this couple is in the way they build up emotions, and their best chances are in time and patience, things that Leo rarely possesses, and Capricorn rules. Too much pain in their prior emotional relationships, both partners could be almost too stubborn to get to the point where they might actually fall in love.

Leo and Capricorn love compatibility says that they have one thing in common and it is their awareness of their Selves. It will be a rare occasion when Leo is attracted to a Capricorn, but the other way around attraction seems more probable. They won’t often get to the sexual part of their relationship, for even though they both might enjoy the chase, they will not see their future together. Leo is a warm, passionate sign, and Capricorn likes to be coolheaded and practical. This doesn’t mean that Leo isn’t at all practical, or that Capricorn isn’t passionate, but they won’t see each other as similar in any way. The rulers of these signs represent one of the archetypal conflicts of the zodiac and tell the story of the fallen ego. And this could pull them both in a direction that may endanger their self-esteems and affect the image they have on their beauty and attractiveness. Their sex life can easily become boring for both partners, and what they often don’t realize is how similar they actually are. One way for them to have a healthy sex life is to share warmth and spicing things up, always bringing new experiences. If they find themselves in a rut, they might stay there for a very long time, leading to the loss of libido and confidence, up to a loss of any sexual desire. Leo and Capricorn’s love life will be boring as they may fail to fit into each other’s set of expectations.