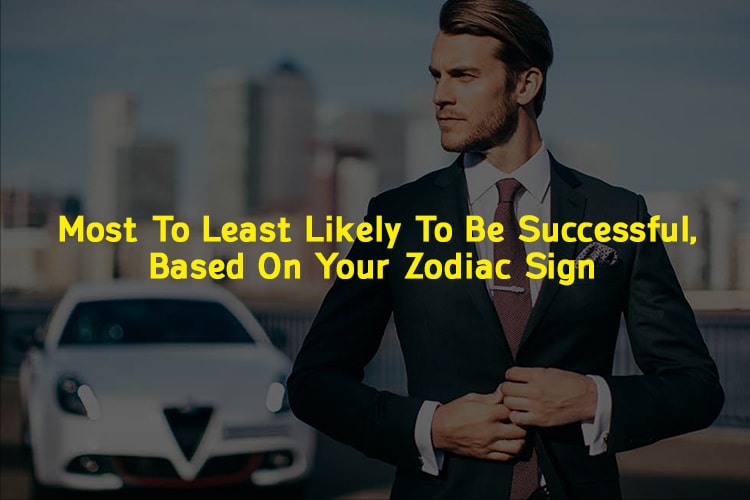 Virgo, you do what no one else can: you predicts success. You often keep a level head when making decisions and you know that with patience and the right amount of effort, anyone can succeed. Instead of limiting yourself to doing the bare minimum, you find something that you are most interested in and put all of your efforts into making it work for you.
As a Virgo, you know success isn’t about reinventing the wheel; it’s about improving what’s already out there. Maybe you discover a cure or write a book or create an invention, but you aren’t afraid to thank all those before you that helped give you a starting point. This humble attitude — combined with a penchant for accomplishing your goals (it does give you a rush of adrenaline, doesn’t it?) —makes it easy to see why you’re most likely to get rich.

To the outsider, people see you as a little erratic and maybe not as reliable as you could be. But to your family and friends, Scorpio, you’re seen as someone who is destined for greatness. As a Scorpio, you are very intuitive; you know how to follow your heart instead of just your brain, which often takes you to places you’ve never considered before.
You see the world differently, but you know not to get your head caught in the clouds for too long. Scorpios are generally very trustworthy, so if you and your BFF are looking for a groundbreaking way to get rich together, they can be reassured that you won’t flake on them when things get tough. However, anyone who wants to get involved with your schemes to get rich need to trust that your intuitiveness isn’t just talking, there’s follow-through, too.

As a Leo, you know the importance of sticking to your guns and not giving up just because someone doesn’t agree with you. Everything you do in life is deliberate, which means that you don’t just invest your time in something for the heck of it. Leos are very instinctual and will trust their gut when making big decisions.
You’re also very creative, Leo which means your opportunities to get rich are endless. You might take a page out of an admired celebrity of yours and try a few different things to get that money, but however you do it, it’s obvious that you’ve got more than a few ideas bouncing around your head. You aren’t one to bring a lot of people onboard your ideas, though. Leos don’t like to ride anyone’s coattails to success in the first place, so they hope others respect them wanting to succeed on their own.

If anyone embodies the phrase “work hard, play hard” best, it’s you Taurus. You understand the value of hard work, but you also know that play is just as important. If you are making the effort to get paid, you want to enjoy the time you have to reap the benefits of being rich. That said, your success story isn’t going to be an easy one.
Taurus, you may be stubborn to a fault, but this is actually a blessing in disguise. Instead of giving up at the first sign of trouble, you NEVER give up. A lot of people might call you crazy or try to tell you that you’re wasting your time, but pushing despite failure only makes your success that much sweeter. This is especially true if you want to be an inspiration for others (and who doesn’t?) because one day, you’ll have a lot of people looking up to you and admiring your success.

In typical Capricorn fashion, you consider every angle of something in life before making a decision. You are not the type of person to make a silly mistake and just shrug it off. Instead, you pride yourself on being someone that makes decisions with your head, not your heart. This might seem cold or too unemotional for some, but the proof is proof enough; you know how to get results, Capricorn.
If you’re going to get rich, you know that nothing screams “success” more than being smart. You can’t expect to throw money at everything and hope something works out for you, right? No! Instead, you map out what’s worked for you in the past and what hasn’t, and planned accordingly. This isn’t to say you can’t get creative every once in a while, but as a Capricorn, you’re much more comfortable doing things with intelligence and brain rather than feelings and emotions.

Aries, your ambition is going to take you VERY far in life — but you knew that already, didn’t you? Your ability to make it happen, as Tim Gunn would say, means you know what it takes to make some serious dough. You don’t often ask your friends and family to get in on the action, though, since you know that no one works better with an Aries than an Aries. If you want to get rich, you really need to put your mind to it. I’m not saying that you’re flaky or lazy, but with so many balls in the air at once, you really need to make sure that you’re prioritizing the right things.
The best way to do this is to make your job your favourite thing in the world. If you love acting if you want to be a model if you want to invent the next best thing, use that as your motivation to get things done. As an Aries, you don’t often have time to play around, which is why loving your work makes getting rich feels like an accomplishment AND a party.

Aquarius, you are that mid-point where your success could go either way. In any case, you’ll end up successful, yes, but if you want to get rich, too, you need to play your cards right. Being an innovation and original person definitely helps. You will often be the first person to try something new or actually figure out how to reinvent the wheel.
But you can also be cautious of who to trust with your new ideas and not know how to make things happen for yourself. It might be a good idea to go into something with a partner, but that can make you nervous, too. As an Aquarius, you feel like you’re the only one who truly gets what you’re trying to do or who you want to be in life. So to have someone else step in and possibly take the limelight away from you can be a deal breaker. Unless you totally trust someone to help you get rich, it might not ever happen to you. Remember, asking for help isn’t a bad thing.

Sagittarius, you aren’t the first one to jump at the chance for help, especially with something as important and life-changing as getting rich, so becoming the next millionaire doesn’t look like it’s going to happen for you. The idea of being tied to a partner or not being able to let your creativity flow freely will deter you from even just trying it before saying no.
Your inability to want to work with others and possibly even let them control some of the decisions can make you seem very flighty, even if you usually aren’t. You’d rather be the lone wolf that surprises everyone with the amount of success you can achieve, but you forget that networking and collaborating are huge parts of getting rich. You might try your own way for a while, but I can’t promise that it’ll turn out the way you want it to; you’ll need to follow through to know for sure.

As a Cancer, you so badly want to make a difference in the world, but not for the same reasons as everyone else. Your idea of being successful has nothing to do with getting rich, which is probably a good thing as you aren’t exactly prepared for what it takes to get rich (sorry, not sorry). To make it big, you often need to get yourself out of your comfort zone, which is a BIG no-no for you.
Cancer, you are very wary of those “get rich quick” schemes, even if your best friend is telling you it’s legit. You are SUPER sceptical and suspicious, and would rather give up an opportunity you know nothing about and instead, make a safer choice. Sometimes, getting rich means taking risks and seizing the moment, but that’s not your thing. You will make a name for yourself, no doubt about that, but without all that money attached to your success.

Many people will tell you that your head is too much in the clouds for you to find success, Pisces, but that’s only because you like weighing your options. This might be good in some situations, like when you have to decide whether or not to take that new job, but it can also be detrimental to your success, like when you have the opportunity to move somewhere new and start over, but instead worry too much about the consequences.
When it comes to the prospect of getting rich, you turn wishy-washy. In other situations, you can either be fearful or overly trusting, but when it comes to taking risks and trying something new, you’re somehow both. You want to be a part of something innovative and revolutionary, but you worry that things will turn sour fast. You want to wow yourself with what you can do in life, but you worry that you’re going against your instincts. If you ask me, this is too much overthinking for it to work out for you.

Libra, you will find your place in the world, but it won’t be with the rich and famous. You have the ability to be happy and make a difference, no matter what you do in life, but you need to stop being so critical.
As a Libra, you can either be very balanced or you can be all over the place. Your criticism ranges from your own abilities to do something great and the outside world’s abilities to lend you a hand when you need help.
You often shy away from opportunities that involve some risk and trusting your instincts because you’re afraid you’ll let yourself down and never get rich.
And instead of asking for help or looking for some tips, you automatically believe that no one will be able to point you in the right direction. These self-deprecating thoughts can be toxic, Libra, but you need to get out of your head before you can try again. Getting rich isn’t easy, but if you go into it with nothing but negative thoughts, it’ll never work out.

Gemini, you might think your knack for being indecisive about everything only ranges from deciding what to wear today to what to make for dinner, but you are sadly mistaken. You can be VERY hesitant to take a chance or make a big decision, which not everyone has time for. Instead of being a spontaneous, “trust your gut” type of person, you take a lot of time weighing the pros and cons of everything.
This can be a good trait to have, especially if you want to make informed decisions in life, but some things are meant to be spontaneous. By hesitating before every choice, you’re giving someone else the chance to sneak in and take what’s rightfully yours. Not everyone plays fair when it comes to making money, but sometimes, that’s the ONLY way to play. If you want to be known as the submissive person who can’t stick up for themselves and make things happen, keep doing what you’re doing. If you want to be successful, take notes from successful people.