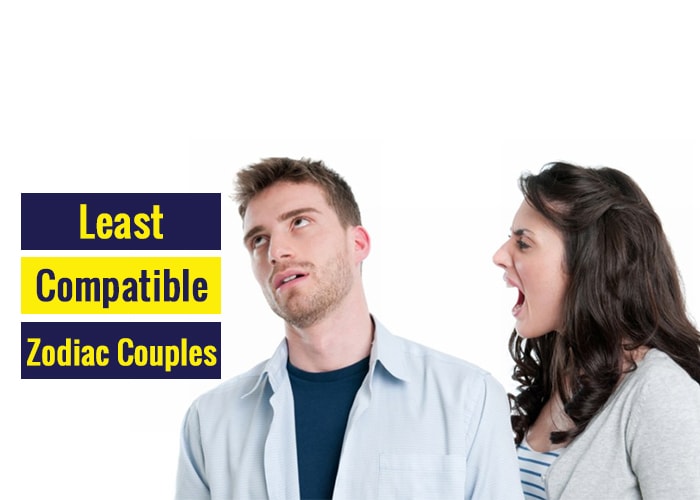 Almost more than any other sign in the Zodiac, Scorpio needs someone to complement them — not replicate them. There’s a reason you never hear a Scorpio say “I married my best friend!” Another Scorpio will put Scorpio on the defensive and they won’t be able to feel comfortable enough to open up and do any of the “loving” aspects of a relationship. That’s why Scorpio + Scorpio is among the least compatible zodiac couples.

Also Read : The Two Faces Of Each Zodiac Sign

A Taurus prizes loyalty and stability above all else, which feels stifling to any Gemini they date. Similarly, a Taurus finds Gemini’s ways chaotic and unpredictable. These signs stress each other out!

On paper, this pairing should do well, but it often feels like something here won’t “click”. The two people understand each other’s needs, but they don’t move naturally together. The Aquarius will seem too removed from their body and emotions to the Cancer, and the Cancer will seem too needy and emotional for the Aquarius.

Astrology compatibility of this pair is almost too alike that they don’t work. They each can be really stubborn and cold. They never think they are wrong and struggle in owning up to it when they are. Their fights are always very intense. While they each have an acid tongue they tend to say things they later regret. That’s why Gemini + Scorpio is among the least compatible zodiac couples.

The biggest problem for a Leo dating another Leo is that they both want to be the star. It will be hard for them to find balance as a couple and make sure both people’s needs are being met.

This combination isn’t the strongest as they struggle in communication. A Pisces might drop hints about what they want and need but they will never straight up say it. An Aries needs that clarity which they don’t get. In a relationship with a Pisces one has to be able to read people very well but with an Aries they seem to overlook that. This couple fails because each person just can’t figure out or fake being what the other person needs. That’s why Aries + Pisces is among the least compatible zodiac couples.

This combination is never one that is boring. This couple goes from one extreme to the other and they struggle to find a normal balance together. A Pisces constantly seeking love while an Aquarius is naturally distant. And sometimes that works but other times a Pisces struggle with trust issues and that’s when the two fight. When you’re constantly doubting someone it’s never going to work out.

An Aries will be annoyed that homebody Taurus likes to relax more than adventure out into the world, and the Taurus will be annoyed that they aren’t in control of the relationship. These two have both different values and different personalities, so it’s hard for them to get too close and feel like they have a real connection. They are the least compatible zodiac signs with each other.

Capricorn is a sign that can balance out a lot of signs like Gemini, Sag, Aries and Leo but they can also bring out the worst in other signs like Taurus and Libra who are a bit prone to materialism to begin with. The relationship will be perfectly harmonious and they won’t fight, it’s just that as a partner they don’t make each other better people.

There’s not a lot that Aries and Capricorn have in common, and both types aren’t the kind of person to slow their roll for someone else. Capricorn is more conservative and wants to protect what they put out into the world more than Aries look-before-you-leap nature allows them to. Aries’ least favorite thing in the world is feeling like someone is holding them back, so they’ll struggle with Capricorn trying to control them. That’s why Aries + Capricorn is among the least compatible zodiac couples.

Also Read : 7 Zodiac Signs Most Likely To Get Famous

This is an unlikely pairing of people who see the world very differently. Aquarians wacky ideas can feel exhausting for the Taurus, while the Taurus can feel too boring for the Aquarius.

This is a hard relationship to get going as they don’t live very similar lifestyles. The one thing that could make it work is Capricorn and Aquarius’ shared interests in classic ideas — philosophy and art. If they can build a solid foundation of friendship based on common interests, they might begin to understand and meet each other’s needs.

Cancers primarily value their home life and the foundation of support they build with their partner while Geminis thrive on *not* needing a foundation (which means they’d be stuck in one place for way too long). This sets up an uphill battle for couples because they aren’t a natural pairing — HOWEVER — this can make it all the more special when it *does* work.

This is a difficult relationship as the Aries will always feel slowed down by their Cancer and the Cancer will always feel like they can’t relax around the Aries. They have different values and different dispositions — and not necessarily in a complementary way. However, with the right people this relationship can work — the Aries will inject excitement into the Cancer’s life and draw them out of their shell and the Cancer will help the Aries venture into their own minds and get in touch with their emotional needs.

These signs make great friends as they can appreciate fun and indulgence together, but they don’t often make great couples. People born under Taurus tend to want to settle down while Sagittarians tend to want to drift around. They aren’t naturally suited to complement each other.

Zodiac signs compatibility of Aries & Scorpio is a toxic combination. Each hothead. Each gets angry very quickly. And each is very competitive. They each strive to be the dominant ones in relationships and fight for power. They each come across as overly confident and a little too blunt sometimes so the things that do come out of their mouth when fighting aren’t nice.

Also Read : The Perfect Age To Get Married, According To Your Zodiac Sign!

These signs are not alike in what they value or in personality type. They truly do not like fundamental things about who the other person is or what they want and will quickly grow resentful of each other and bicker a lot.

These two will drive each other CRAZY. The Gemini will feel like a child to the Virgo and the Virgo will feel like an overbearing parent to the Gemini. Their friendship and romantic compatibility is almost zero. That’s why Gemini + Virgo is among the least compatible zodiac couples.

Also Read : Zodiac Couples That Can Be The Worst Enemies

This is arguably the worst combination of any two signs. This pair just seems to bring out the absolute worse in each other. Like a tornado coming into each other’s lives and just ruining everything about the other person. There are some people who just shouldn’t be together and this duo is toxic. Hence Taurus + Scorpio is among the least compatible zodiac couples.