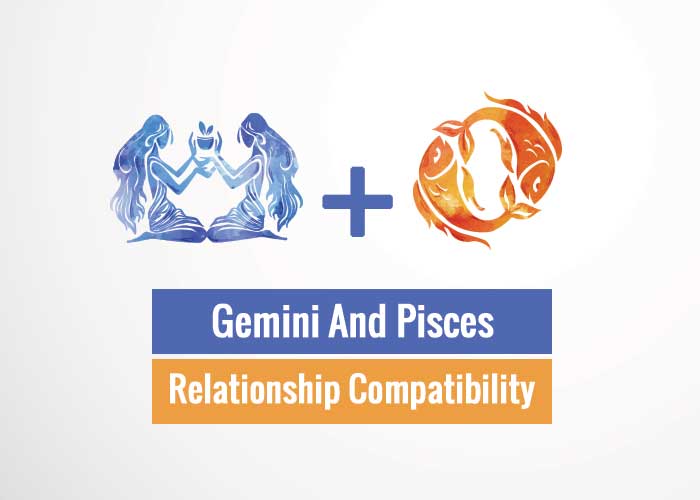 If Gemini deals with everything with their intelligence, Pisces deals with their emotions. They have a different approach to dealing with the situation. The similar trait in both of them is, they both are indecisive in nature. They both fail to take a decision at the right moment. The traits that they both share make difficult for them to contribute equally or understand what their partner wants in the relationship. It may be very difficult for them to understand the needs of their partner. To know more about how compatible or incompatible they both can be, give a look at Gemini Pisces relationship compatibility.

Pisces is a misunderstood sign, which makes their character a complete mystery. They are caught up in their wild imagination which results to attract curious Gemini. The witty communicative Gemini and their childlike charms can make sensitive Pisces get smitten. They can be attracted to each other. But more likely to know each other first.

Gemini Pisces relationship compatibility says that their understanding of each other can be a bit confusing. Neptune ruled Pisces are sometimes lost in their own world. They become highly sensitive and emotional and it can cause trouble for Gemini, who doesn’t like to stay in one place forever. Gemini might misunderstand Pisces for their vulnerability which results in misunderstanding and underestimating them. However, they will understand and respect their own personal space but still, their understanding level is not a straight line.

Also Read : Know Why There Will Always Be 12 Zodiac Signs

Deep talkers’ Pisces can add meaning to full stories on their conversation, which makes Gemini more curious about them. Gemini, having great communication skills and the emotionally Intelligent Pisces understands the hidden feelings of people around them. This amazing trait of both signs, when meets, magic happens. Their conversation becomes poetry as their love for art will allow them to be more creative in their words. There will be good communication between them as they both know how to communicate well.

Gemini Pisces relationship compatibility says that trust will lack in their relationship, trust is already a weak spot in almost every relationship these two can have and when they get together, there is a chance they will have no idea how to create any trust between them. They are not the owner of their own words which means they can change anytime at any place. They have completely different ways of dealing with their emotional relationships and their issues with self-image, and they will think of many different ways to change the truth when they are together. Unfortunately, when any of them lies, they won’t have much success. Gemini is too smart to be lied to by their Pisces partner as their intelligence is such that they will hard to fool, and Pisces sense their Gemini partner’s state too well to not realize when they’re not telling the truth. Basically they both dip into each other’s unconscious and see each other in the way that none of them looks at themselves. Their relationship will face difficulties due to the lack of trust and the failure to trust each other.

Gemini is not that emotional but Pisces is, Gemini is one of the most rational signs in the zodiac and Pisces is the cureless romantic and one of the most emotional signs. When they do fall in love, they are rarely on the same frequency and often only one of them has true emotions for the other. Pisces may try to connect with Gemini and Gemini may even understand Pisces’ melancholy nature. They may try to connect with each other emotionally but it may hardly be successful in it. They represent ideal candidates for an unreturned love scenario and can be a nuisance to everyone around them if they end up in a relationship with no emotional balance.

Gemini and Pisces love compatibility says that it is a good thing there is so much creativity to Gemini’s approach when it comes to their sex life, or they would really have difficulty making any sort of intimate connection with Pisces. Pisces, exalt Venus, and they only want to have sex with the love of their life, unless they’ve been disappointed too many times. If they meet after these numerous disappointments, Gemini will not find Pisces very attractive, for they will no longer have any childish energy or charm. Gemini has a lot of creative potentials but isn’t exactly in search of their one and only true love in order to have sex. They can be attracted to each other due to the fact that they are ruled by the same planets that rule their opposing signs, Mercury and Jupiter. Still, there is a big chance they won’t even recognize each other as sexual beings or keep a distance from each other if they do. If their sex life is supposed to be functional, both of them will have to find a way to be a bit more grounded than they normally are. Pisces will have to accept the differences of their partner instead of searching for a soulmate with predefined qualities. While Gemini will have to realize the truth behind their own emotional nature and give in to true intimacy.

Also Read : Know Your Zodiac Signs’ Personality Traits And Dates According To The Astrology

Gemini Pisces relationship compatibility says that it may be difficult for the couple to cope up with the changing nature of their partner. If Pisces is known for its patient nature, Gemini is one of the most impatient signs. These differences may affect their love life. Their relationship is a mixture of both sweet and bitter. Sometimes they might fail to understand their differences. But they can share a great bond and affection for one another. They need to focus a lot on many factors if they want their relationship to work smoothly. Despite having many differences, if they want, they can be in a happy and healthy relationship