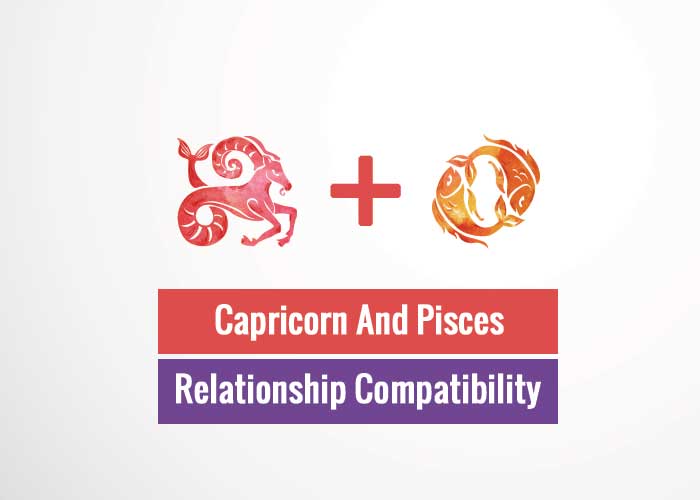 Nothing matches the pair of earth and water elements. Water is fluid, full of emotions, and which needs a container like the earth which can keep it grounded as the earth is about practicality, the value of physical and materialism. Hence, these pair fits the best as water will nurture the earth to bloom and earth will give water a sense of security. However, there are other water and earth elements as well. But Capricorn is a cardinal sign and Pisces is a mutable sign, which means both are adaptable. Even though Pisces are more adaptable and that is why cardinal signs will help it to balance as being an earth cardinal sign(Capricorn) they may mold themselves in respect to circumstances they will still be grounded and never forget their roots. And that is what Pisces will learn from Capricorn. And Capricorn can understand there is so much more than the material world. To know more about them lets go through Capricorn and Pisces relationship compatibility.

Capricorns are very much ambitious in nature. And they are also very much addicted to material pleasure. But as it says too much can’t do anything but harm. So when Capricorn meets Pisces, Pisces will open that chain which we anchored with material worlds. On the other hand, Pisces are very much dreamy, in tune with themselves. They don’t care about the material world. So when Pisces meet Capricorn, they will make Pisces realizes the reality of the world than just living in their imaginations. They will help Pisces to use their abilities and skills to sustain and to be practical. So their attractions are not more of a physical appearance but about having values. They will attract each other due to their personality. As they feel they can balance one another.

Capricorn and Pisces’ relationship compatibility says that both of these signs think big in life and which is why their conversation can be very much motivating, having a big picture but also analyzing details. These signs don’t conflict much. Well doesn’t mean they agree on anything. But they both try to understand the different parts of the story. So both of their minds are broader when it comes to communicating ideas, thoughts, its feelings. Most of the time, it brings light to their lives.

However, Capricorn’s partner may find difficult to understand Pisces at times as Pisces are very much in tune with their inner self. So for Capricorn, it can be too much sometimes. But once they settle down, slowly Capricorn starts to understand their partners’ nature. Understanding is something builds in time in every relationship. And even the understanding signs like Pisces may doubts their own thoughts towards their partner, as Capricorn is not so much vocal about their emotions and how they feel. So even the Pisces understand and feel their partner but they doubt that feeling of a partner. Because Capricorn intently tries to act cool and tries to be rude and that hurts Pisces sentiment. So it can be difficult for Pisces to proceed but they always ended up understanding them.

Capricorn Pisces relationship won’t lack emotional connection. These partners share a deep emotional bond that can be built for years until it truly blossoms. The most wonderful side of their relationship is in the expectance of emotion, the ability to bring out the best in each other and yes, the constant growth. Capricorns are not good at expressing emotions. They often don’t like to be vulnerable. But here is the deal. Pisces, let them open up. And for sensitive Pisces, they get drain in emotions that Capricorn needs to show them a mirror. They will be able to connect with their partner through their emotions.

These two signs will always have faith in each other. But however, because of the Pisces’ easy-going nature. Capricorn may think that the relationship between them won’t work out, not because they don’t trust their partner but because of the fact that they don’t trust their relationship. As for them, everything is about managing, maintaining, practicality, and organized so they tend to see Pisces lost nature as a threat. But they need to stop being so much critical about stuff as everything is not like a business of a corporate world. And Pisces need to come out from their shell and balance both theirs and their partners’ importance.

Capricorn and Pisces love compatibility says that their sex life will move in a strangely spontaneous way. The sex life that they can share is unexplainable when their characters are superficially observed. The sexual relationship between Capricorn and Pisces is a contact of two powerful individuals, one of them extremely strict and rational, and another flexible and emotional but confident about their beliefs. There is probably no better way for a Capricorn to relax than to enter a relationship with a Pisces partner. Differences between them will create a strong attraction, almost as if they were opposing signs. Capricorn will be inspired to let go and open up to their partner, while Pisces will easily ground their affections and find a way to show them through physical contact. If they stay together long enough, they could make a perfect blend of stability, trust, and emotional excitement. They can awaken the best qualities in each other and share strong intimacy through deep emotionally-rational understanding.

Overall, Capricorn and Pisces relationship will be filled with mutual respect that they have for each other, which harbors an immense sense of loyalty and honesty in both the minds. When they begin their relationship, they wish to do everything together. Even though their interests usually differ, Capricorn will be inspired to get inside the world of Pisces, as much as Pisces will want to solve the equation inside their Capricorn partner. It is strange how someone like Pisces can value stable emotions that much, but they help them to finally rest their mind and their heart when they are in a stable emotional relationship. Capricorn will surprisingly value one’s ability to be in touch with their emotions and have a clear vision of a positive outcome. All they need is a bit of effort to make this relationship a happening one.