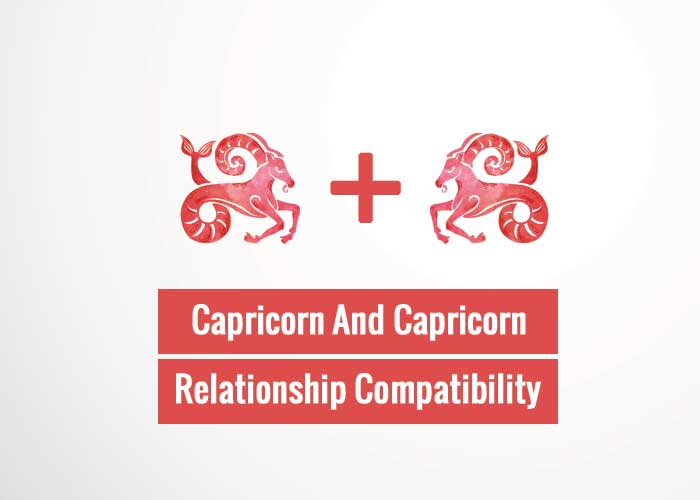 Capricorn is known for its ambitious nature, and this native possesses an inner state of independence which helps them make solid progress in their personal and professional spheres. Though they are members of the same Sun sign, still every Capricorn is a specific individual with their own set of values that have to be set in stone. When these two Capricorn natives meet, the first few months can seem to be ideal whichever way you look at it. But as they proceed, they will start developing mistrust, and their inherent nature to dominate the other can ruin what could be a perfect relationship if only they could be more compromising, but they are not. To know more about them lets go through Capricorn and Capricorn relationship compatibility.

Capricorn is known for their skills, they are master of self-control and has the capability to lead from the front and to carry out solid and feasible plans, and also possesses the ability to manage their entire teams efficiently at any time, at any given situation. The Goats do not hesitate to learn from their mistakes and wend their way to the top ladder of their profession solely based on their experience and skills. This quality when reflect will attract each other. Their love match is bound to take a long time getting off the mark if they really fall in love with each other because they search for stability, they search for a security, and only then they will move ahead.

Capricorn and Capricorn relationship compatibility says that their intellectual relationship can become a debate arena, but chances are greater for a silent tournament in which none of them can ever win. There is so much two Capricorns have to discuss. But in many cases, they won’t even feel the need to talk to each other that much. They would have a lot to say, both of them interested in each other’s lives and stories, but with a fence in front of their faces, that doesn’t give them the opportunity to truly share. In order to build a relationship with the right amount of meaningful conversations, it is best for them to work together and solve the same situations with a shared mind. As when they work on the same project and find themselves in a situation in which they have to talk, they will discover many things they agree on. If they are successful in this they will be able to resolve equations of life with one another, they might start enjoying their communication a lot.

Capricorn partners understand each other so well, that most of the time they do not even feel the need for any communication. But if they lose their closeness enough to lose the understanding of each other’s needs and desires, there is a big chance they will have to end their relationship and find someone a bit more compassionate and mellow. And at the same time, the rigid nature of Capricorn doesn’t allow much understanding when it comes to behavior that “isn’t approved” and being a Capricorn doesn’t exclude anyone from the primal equations each of them sets. This may create more misunderstanding. They might fail to understand where they need to show up and what is truly important to their partner.

Capricorn and Capricorn relationship compatibility says that emotional contact between them can be a very interesting thing. It is a good thing that they share the same approach to all relationships, being unable to open up until someone lets the pressure drop and makes them feel safe and secure to express how they feel. Capricorns are folks that rely on their lack of emotion most of the time, always trying to be cold, controlling, and rational. If they truly fall in love with each other, they will need a lot of time to confess it, for both of them dread any public displays of emotion and don’t feel confident enough for private displays either. They can be saved by a simple word of confidence, and by their understanding of each other’s emotional depth that isn’t easily reached. And unfortunately, they may drift apart soon because of the fact that they use their brains only.

Capricorn and Capricorn’s relationship may lack trust due to the fact that they both know that their partner is a Capricorn. They know that their partners are a better, more honest version of a Capricorn. There is a strange need for a competition between these partners, and this won’t exactly help them to believe each other or trust their future altogether. This may create a problem in their relationship when talked about trust. Since, these Capricorns prefer to be silent most of the time, which can in many cases lead to mistrust and all the accompanying complications. The problem doesn’t end here but lies and silences that they decide to create. If they form that quiet but tense air around them when they try to communicate, both of them will question each other to the point in which they lose sight of who their partner actually is. This relationship will suffer from a lack of trust.

Capricorn and Capricorn love compatibility says that the sex life of this combination is somewhat mysterious. It is hard to say anything about this couple, let alone imagine their sex life. Since these signs exalt Mars which means they have a strong libido and they have the need to follow their instincts. This shows that they will have a great sex life. But these are also two people who hang on to their reservations and deny themselves the need to make their carnal desires the basis for a satisfactory relationship and this may affect their sex life. Practicality doesn’t go well with sexuality, and while other partners can awake their sexual creativity and form an intimate bond with them, these partners will rarely satisfy each other in a sexual and emotional sense combined. When they start a sexual relationship, they could go to one of two extremes. Either they will fully understand each other’s needs with very few words, or they will just hit the wall every time any partner wishes to create a more intimate atmosphere. It is hard to define the level of satisfaction in their love life.

Overall, Capricorn Capricorn relationship will be filled with stability, security, rational decisions, and yes, a secure future for both. Capricorns are loyal, responsible and this will benefit this relationship. But they may lack emotional connection due to the fact that they are rational and finds hard to understand each other’s emotions. But if an effort is made they will be able to fit in this relationship easily and will be able to maintain it as well.