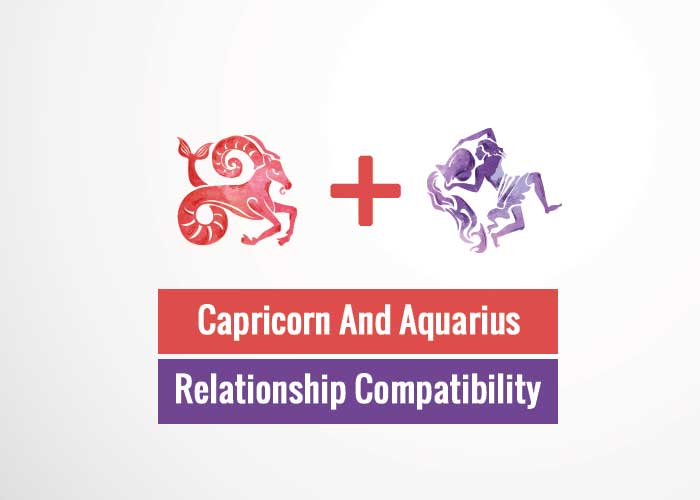 Capricorn takes everything on its merit and has the capacity to put emotion on the side and solve every problem with the tools of logical reasoning and understanding. Aquarius born sign requires the freedom to express themselves and their opinion without any qualms. They are both ruled by Saturn, which certainly cultivates a degree of familiarity between the two. This is a romance between two unassuming but determined personas. It is very difficult for Capricorn and Aquarius to connect with each other on an emotional level. So will this relationship work out? Let’s go through Capricorn and Aquarius relationship compatibility to know whether they will be able to make this relationship work.

Also Read : How To Attract An Aquarius Woman? Find it out

Capricorns are characterized by their determination, dedication, and a steadfast approach to life. And these traits of a Capricorn will attract an Aquarius. Whereas, an Aquarius sun sign is characterized by its high intellectual capacity, cerebral strength, and open-minded attitude. And their intellectual capacity is enough to impress a Capricorn. They will get attracted to each other very quickly but it will take time for this love match to develop into a relationship since they both are reserved when it comes to opening up to others. As this relationship began, the initial stage will be stable. But their differences may affect this relationship in the long run. The mystery and charm of an Aquarian bring an unusual sense of calm to the goat’s strained mind. Capricorn helps add realism to the Aquarian’s dreamy plans and gives him/her a practical roadmap to materialize them.

Also Read : How To Attract A Capricorn Woman? Find it out

Capricorn and Aquarius have this distant, cold, silent agreement that they are both worth each other’s respect and it can seem terrifying at times as they distance themselves from their partner in order to remain in this agreement. It can be kind of painful to watch this relationship between two intellectual beings. They would rather be in no relationship than look at each other in a different way, and because of this, they could form a beautiful, lasting friendship than a relationship. They are quite different from each other and this may pose a threat even in their communication process. But as long as they have shared interest and their mutual love for the seriousness of their bond, there will be good communication between them.

Also Read : How To Attract An Aquarius Man? Find it out

Capricorn and Aquarius’ relationship compatibility says that they are both visionaries and thus, can understand each other’s passion for life. But apart from the passion they may fail to understand other aspects of their partner’s life. There is no real freedom for Aquarius if the rules of their preceding sign aren’t followed, it is not easy for them to understand each other’s way of living. Capricorn believes in leading its life in a planned, meticulous manner. Whereas, the Aquarian soul yearns for adventure, exploration, and exhilaration. This can be a massive cause for conflict in this relationship, as one fails to understand the drives and desires of the other. This relationship may lack mutual understanding.

Also Read : How To Attract A Capricorn Man? Find it out

Aquarius truly believes in the power of honesty and the Capricorn holds himself/herself to very high standards of loyalty and commitment. This gives them both a steady sense of respect for each other and the universal truth is trust is invariably built on the roots of understanding. One of them has stone cold convictions and the need to never be wrong or make a mistake of any kind, while the other has no fear of confrontation and values the image of truth among the human race too much to have the desire to lie. Their ideas of trust are different. The lack of trust between them is not really the lack of trust they have in each other, but in the possibility, this kind of relationship will work out.

Capricorn and Aquarius relationship compatibility says that it is something really strange. The biggest plus of this relationship compatibility is that they both like to take things slow and are not interested in inflicting a whirlwind of emotions on each other. In general interpretations, these signs are supposed to be unemotional, detached and closed up for emotional interaction with other people. However, this is not exactly the root of their lack of emotional connection. Aquarius belongs to the element of Air and it is a sign of ultimate overall faith, different than any religion or rule that a human might have created. Whereas, as an Earth sign, Capricorn needs emotions to be shown in a physical, practical way. This is exactly why they are often described as selfish, taking care only of their own needs.

Capricorn and Aquarius love compatibility says that their sex life can be fun, but at the same time the victim of their contradict preferences. As the main problem in their sex life will be their different pace, and the difference in their elements mostly causes this. Capricorn is slow and thorough. Aquarius wants things spontaneous and fast. It is sporadic for an Aquarius to have the patience to wait for Capricorn to make a detailed plan, and this will be a great turn off for Capricorn because they don’t like anything done in haste and the heat of the moment, especially when it comes to sex. It would be easy to make a simple assumption that Capricorn is traditional and restricting, while Aquarius is the opposite, but they are both traditionally ruled by the same planet, and it would be silly not to understand their similarities. They may find common grounds and thus may help them to build that bond in their relationship. The respect they will have for each other could make them become very good friends, and they might even build a quality sexual relationship on a foundation of friendship. They can both be very passionate when with the right partner, but the starting point in their approaches is usually simply too different to work out.

Overall, Capricorn Aquarius relationship may face more conflicts than love. They are signs with different values, beliefs, desires. Capricorn values boundaries and Aquarius values freedom. The breezy and careless attitude of the air sign might dance on the nerves of the Capricorn. And the judgmental nature of the Capricorn sun sign might become too much to handle for the Aquarius. The key to making this relationship compatibility work is for both the partners to make peace with the fact that there will always be something about their partner that they won’t be able to comprehend. If they can do this, this relationship may work.