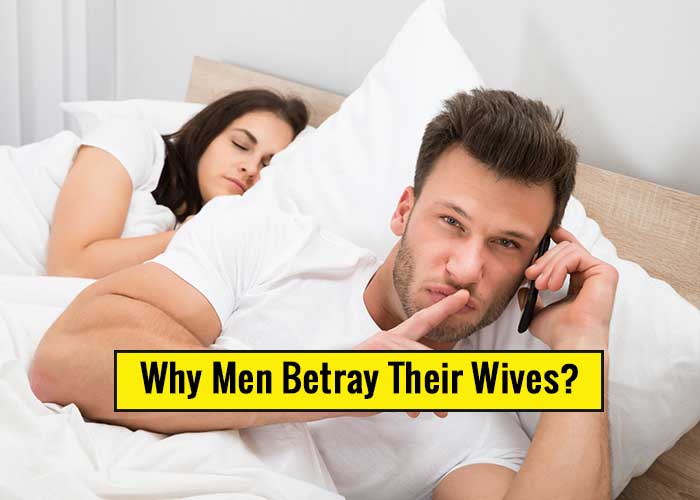 5 Reasons Why Men Betray Their Wives

After marriage, cheating, but why? A questioned that may arise in one’s mind. But yes, cheating after marriage and it does take place in high number. The reason may differ but the ultimate result is they have cheated on their wives. And to answer why men betray their wives, here are 5 reasons to answer the question of why.

1. He was in a relationship before which he has not to get rid of:

It is not that all marriages are loved marriage, there are marriages done for the happiness of others and when it happens, loyalty in the relationship somewhere loses its base. Maybe he was in a relationship that he couldn’t get rid of even after his marriage and is bound to take a step that he should not. The reason as to why do men betray their wives is because of the unwilling marriage that they did. They want to get back to their love and in this process, they cheat on their wives.

It can even happen due to the influence of some drugs or alcohol that he might make the mistake. Sometimes man betrays their wife unknowingly in the influence of some addiction. And the other reason can be he is not mature enough to understand the values of marriage and how the principles of it should be maintained. It is one of the reasons as to why men betray their wives.

His intention was never pure. He always wanted more than one partner in his life and maybe that is the reason he is not loyal and he betrays you. There are men who happen to play with girls even after their marriage and not only when they are in a relationship.
Even this is the reason as to why men betray their wives.

He is insecure about himself. He wants more attention and for this need, he ends up cheating his wife. It usually happens that a few men tend to be insecure and so insecure that they search for new faces, for more love. It can even happen that he is scared of whether you may leave him because of his flaws and in this fear he takes this step of finding someone.

5. He is unhappy and dissatisfied:

Also Read : 4 Zodiac Signs Most Likely To Hold A Grudge