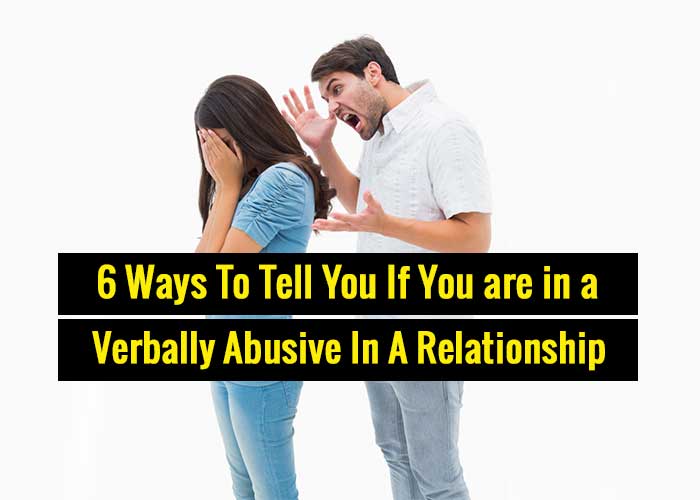 Relationship, you take time to understand, know a person and head with him or her or sometimes you even don’t take time in doing all this saying love is blind but that much blind that you don’t take time to know them, or to understand how abusive they can be once you enter in a relationship with them. It is horrifying to know that the person whom you thought amazing in a moment was so abusive in the other. Sometimes it may be just a situation, as not everything is in one’s control, and sometimes we unintentionally abuse someone as no one is perfect and with time one may become mature. But not keeping you in an illusion if you are facing a situation where your partner is abusing you, again and again, the only way is to walk out of that relationship. Here are 6 ways to tell you if you are in a verbally abusive relationship and if you can relate to it, either try to solve it with effective communication or just move away from it.

1. Arguments with no base and no meaningful conclusions:

There will be a series of argument regarding one topic, which your abusive partner will take out even after knowing that there will be no meaningful conclusions. They start a topic and keep spinning it over and over making every single moment of your worst and worst. This is known as verbal abuse in a relationship where there is an argument over and again on the same topic which spoils both of your moods.

2. Manipulating psychologically and letting you doubt your own sanity:

Making you feel guilty even for the mistakes you didn’t commit. Manipulating you with words in such a way that you are compelled to doubt your own thoughts. This is a sign you are in a verbally abusive relationship where words are been used to torture you mentally, emotionally

Will imposed rule regulations on you and will compel you not to do things you wanted to. They may even torture you emotionally by distancing you or withholding your calls, refusing to talk to you and forcing you to think as to what wrong you did and admitting even the mistakes you didn’t commit.

Talking ill about you, your background or making demeaning comments about your looks and family with the intention to make you feel inferior in front of them. It is a way far to tell you that yes, you are in a verbally abusive relationship and you should take a stand.

If your partner starts making sarcastic remarks quite often or they show acts or behavior which disrespect you in any way, it simply tells you that you are in a verbally abusive relationship. And if your partner plays the blame game, where they make you feel worst and blames you for their behavior, it shows a red flag in your relationship.

Also Read : 5 Signs Your Partner Is Emotionally Abusive In Relationship

Emotionally blackmailing you or threating you for something. This kind of verbal abuse can be very dangerous and may impact one’s life very badly. And one should move out of such an abusive relationship and such kind of partner.