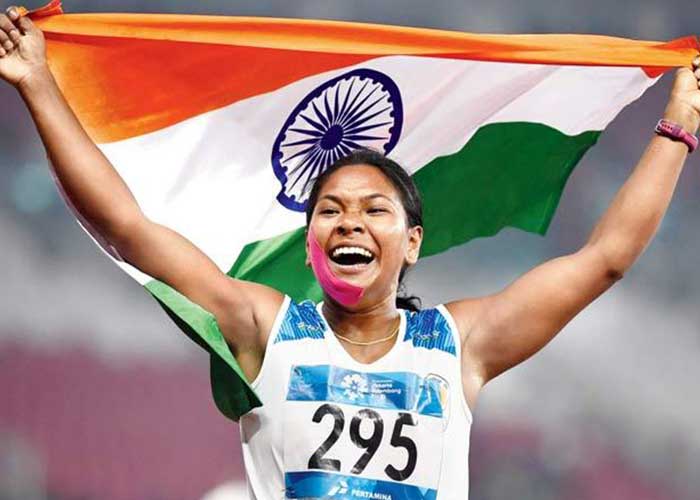 How many of you are demotivated in life by seeing the hurdles in front of your success and is thinking to step back? It is obvious that success comes after a struggle, after giving full dedication and working hard for it. There is two option left in front of you when you come across hurdles in your way of success, either to let that dominate your goals and you end up giving up on your dreams or dominating, suppressing, crossing that hurdle reaching to your goals. The choice is yours. All the successful people who have struggled in life have chosen the latter one and Swapna Barman is one of them.

Born and brought up at Goshpara village near Jalpaiguri district in West Bengal to a rickshaw driver who has been bedridden due to some health issue from 2013, Panchanan Barman and Basana, who worked on a tea estate. Life for Swapna Barman was never easy as throughout life she has gone through pain as she was born with 6 toes on each foot and has to deal with shoes that were for 5 toes but nothing could stop this brave girl from pursuing her dreams. Neither her poverty nor her extra toe could stop her from achieving her goals. She moved and kept working hard without a pause.

The 13 years old girl who practices high jump at her home town in Jalpaiguri was uprooted from there and was brought to Kolkata, 600 miles away in 2011 and now, after 7 years in 2018, she impresses not only her coach Subash Sarkar by her achievement but has also made the country proud. She became the first Indian to win gold in the Heptathlon event at the Asian Games 2018. She won the title by accumulating 6026 points in the seven events competed over two days in the Asian games.

Recently in August, Swapna Barman was honored with the Arjuna Award by President Ram Nath Kovind. On her success, her Coach Sarkar said that the Arjuna Award would motivate Swapna to achieve the Olympic qualification.

“Now we will begin preparation to qualify for the 2020 Olympics. Of course, it will motivate her big time. If she wins another gold at Asian Games or Asian Championships and qualifies for Olympics maybe she would be a strong contender for Khel Ratna or a Padmashri,” Sarkar added.

Also Read : 10 Things Every Woman Should Do Alone At Least Once In Her Lifetime

Swapna expressing her happiness told the telegraph that “I am thrilled,” . “It’s like a dream come true. But saying that, I also have to say that my ambitions don’t end here. I hope to go on to win greater laurels for my country.”

This 22 years old girl has not only made her state proud but also the whole country. An example of women empowerment. She was suffering from injuries even during the game but she didn’t give up. Her dreams, her talent was getting suppress under her poverty, but even then she didn’t let it die, in fact, she burnt that fire within her that nothing could stop this aspiring girl to accomplish her goals. She taught us that dreams are seen by everyone but only the ones who work for it live their dreams. And moving back because of hurdles are just excuses as life is all about challenges and how you see your ambitions.