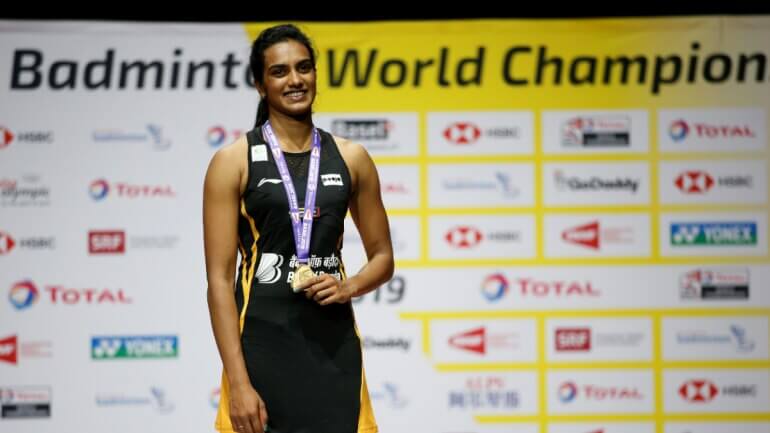 Who thinks women are meant only for the kitchen? If you do so, you need refining in your thoughts, as a woman is meant to shock the entire world by her awesome performance in every aspect. All they need is an opportunity and even if they don’t get it, they create it. If you still have doubts about women’s empowerment you need to look around what it really means and what they can really do. They can make your country proud by their outstanding performance in the international arena and here is the story of India’s Pride, P.V Sindhu, who went in the world championships and printed her name out there and created history.

Born as Pusalara Venkata Sindhu on 5th July 1995 in Hyderabad to P.V. Ramana and P. Vijaya, being a daughter of national volleyball players and an Arjuna Awardee, Ramana who was a member of the team who won the bronze medal at the 1986 Asian Games in Seoul, P.V. Sindhu could have easily walked in her parents footsteps but she was more inclined to badminton after being inspired by Pullela Gopichand’s achievement in 2001 as he became the second Indian to win the All England title.

Just after two years of picking up the racquet, P.V. Sindhu joined Pullela Gobichand who just started coaching youngsters in 2005. In 2008 when the Gopichand Academy was set up, P.V. Sindhu became one of it’s most committed members, she started winning the junior level tournament, making an impact on the international level. Graduating from St. Ann’s College for Women in Mehdipatnam, Hyderabad, with a bachelor’s degree in commerce, P.V. Sindhu solely dedicated her childhood and adulthood in badminton.

Sindhu got international recognition after she won a bronze medal at the 2009 Sub-Juniors Asian Badminton Championships in Colombo. She even managed to claim the silver medal in the singles category the next year at the 2010 Iran Fajr International Badminton Challenge. She has won numerous medals in the national and international arena but she drew everyone’s attention in 2016 when she got the silver medal at the 2016 Olympics, making her the first Indian woman to win an Olympic silver medal as well as first Indian to reach the Olympic final in badminton.

From losing to Carolina Marin in 2016 Olympics final to losing to Nozomi Okuhara and Carolina Marin in the world championships in 2017 and 2018 respectively. Finally, she made it in the 2019 BWF world championship and brought the gold medal to her country by defeating Nozomi Okuhara of Japan in the world championship held at Basel in Switzerland on 25th August 2019. One of the secrets of her success can be traced as the clean and jerk, one of five key exercises added to P.V. Sindhu’s training regimen after the 2017 World Championship, helped improve the strength of her legs, shoulders, and arms. Thus, becoming the first Indian to win World Championships in badminton.

After her greatest achievement, she was appreciated worldwide and was even congratulated by Prime Minister Narendra Modi, from political leaders to famous celebrities and athletes everyone congratulated P.V. Sindhu for her achievement.

She (PV Sindhu) is a role model and an inspiration for the whole nation. She taught the whole world a lesson that if you have the zeal and aim to achieve a goal, no matter how many hindrances come your way or how many failures one faces, you just have to get up and prepare more diligently for the next attempt and this is exactly what she did. Thus, finally, she won the world championships in badminton. Never give up, just keep working with dedication and grab every opportunity that comes your way, success will come to you.