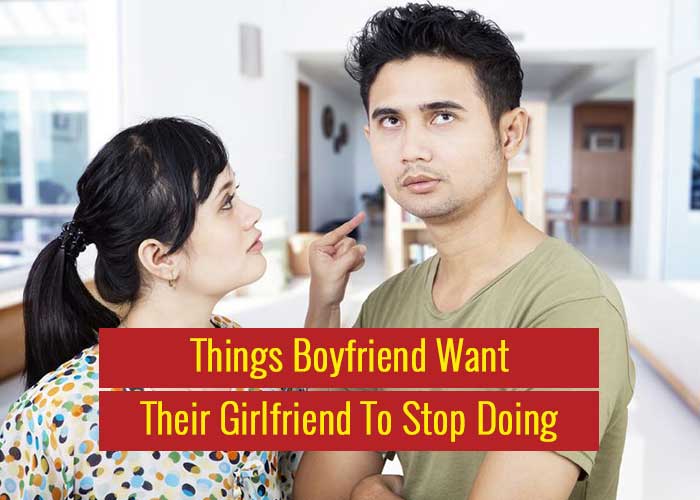 Having support, a company in your life is the best thing you can think about, being in a relationship makes you feel it and have such a partner who supports and gives you company. But along with love, support, company relationship brings few minor stresses. Sometimes you may get irritated by minor things your boyfriend do and you may wish that he stops doing it, exactly like this there are things boyfriend wants their girlfriend to stop doing.

It is quite common among couples to complain to each other and to be more precise for girls it is quite common, if their boyfriend tends to be late for few minutes or do something that was not supposed to, they will go on complaining about it throughout the day. But who actually wants to hear complaints and exactly even this is the things boyfriend wants their girlfriend to stop doing.

Also Read : Top 5 Life-Changing Lessons That You Must Know

2. Taking a lot of time in makeup:

It is like if you couple plans to go somewhere they end up reaching late due to the time went waiting for their girlfriends because they are busy doing makeup. No doubt make up is necessary but taking two, three hours to get ready irritates men to an extent and they want their girlfriend to stop doing it.

Also Read : The Most Humble Zodiac Signs According To Astrology

3. Giving attention to your friends while hanging with him:

You may find it casual and may be busy in a phone call with your friends while hanging with him or texting your friends giggling and forgetting that you are with him to spend quality time together and not to give attention to your friends. It is one of the things that irritates their boyfriend about their girlfriend but cannot convey it directly to them.

Also Read : Expectations Of A Man In A Relationship

4. Vomiting secrets to their best friend:

A few things they want it to be between you both and a man really hates when you share your secrets with your best friend as for them not everyone needs to know everything about and between you two.

5. Calling him to hang out with you along with your friends:

He would love to spend time with you alone rather than spending it with your bunch of friends. Only in rare cases, a boyfriend will love to hang out with her girlfriend’s friends or else he would feel uncomfortable to be around your friends.

Also Read : 6 Things Happy People Do In Their Lives

6. Getting upset because he cannot understand your silence:

Not everyone is good at understanding nonverbal communication and expecting it from everyone can make you disappointed, it is not necessary that just because he is your boyfriend he should be able to read your mind or understand your silence as sometimes they may fail to do it. Most of the arguments start just because of expecting too much in a relationship. And a boyfriend wants his girlfriend to stop doing it.

When you are arguing with your partner in the middle of your argument you just state these two words like, it is just fine, which is not going t work at all. In fact, he will get more annoyed and a boyfriend doesn’t want their girlfriend to use these words because it is really annoying and one should be genuine with their words.

Also Read : How To Tell Someone You Love Them By Your Gestures

Sometimes it may go extra when a girlfriend tags her boyfriend in each and every post, he may not like it often and a boyfriend wants his girlfriend to stop doing it. Because things in a limit are better and not above the limit.

These are the things boyfriend wants their girlfriend to stop doing because sometimes it really gets into their nerves.

Also Read : The Most Lazy Zodiac Signs Of The Zodiac Family